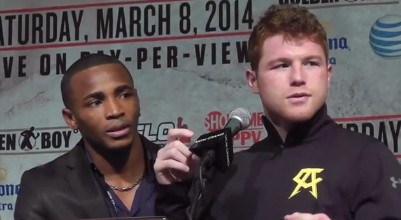 When asked if it was true that his promoters did not want him to take the Lara fight Alvarez responded,
“Well they did not want me to take this fight because he has a very difficult style. He is a very defensive fighter. They understand that a fighter like Angulo is a much better style for me because he comes forward too and is ready to clash in the ring, but I wanted to fight Lara.”

The question also came up as to why he will be fighting Lara without the title being on the line and if it was due to weight issues that the contracted weight for the fight is 155 instead of 154. “No it was not a weight issue at all. The fight is at 154-155 pounds, but I am not interested in an interim title. I fight for the honor,” Alvarez explained.