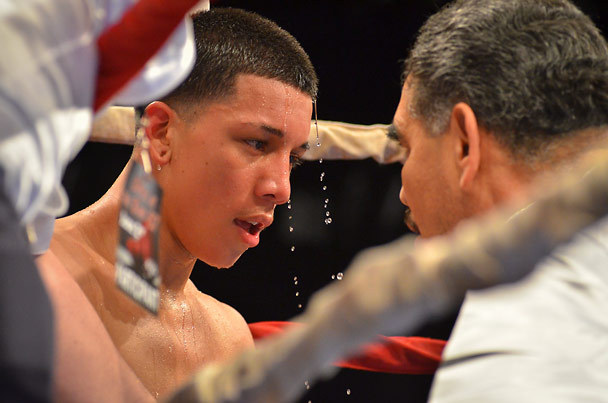 This past Saturday night at the Foxwoods Resort in Mashantucket, Connecticut; We got to see a couple of undefeated American prospects, facing off against, another two very game, tough Canadian prospects. The event was televised via Showtime on their ShoBox platform. It was promoted by Lou Dibella and company promoted by former light heavyweight champion and current top contender Jean Pascal.

The co-main event which turned out to be a very good scrap featured Brooklyn’s Frank Galarza vs. Sebastien Bouchard from Quebec, Canada. Bouchard came to fight and had Galarza on the back foot for a large part of the fight. He absorbed tremendous punishment, especially to the body, throughout the eight round affair, amazingly he never took a step back, and he gave as very good account of himself.

In this fight Frank Galarza had an opportunity to show us a strong jab, ability to fight going backward, counter punching skills and lateral movement. His opponent managed to land a few pretty hard clean shots on him, despite the fact that he was doing a good job of keeping his hands up for the most part. Bouchard’s right hand landed with some regularity, probably because Frank was trying to employ that jab so much, and I think he cut him with a left jab in the eight and final round.

Galarza was the much heavier puncher and landed the cleaner shots wining the fight by unanimous decision. Make no mistake it was a tough fight for both guys and Frank suffered a cut and required some medical attention. His team confirmed that he was going to the hospital about 25 minutes after the fight ended, probably just to check him out. Frank has had a hectic schedule in 2014, three fights in less than five months.

He knocked out Josh Thompson who was 14-0 at the time, in the second round, coming in as the under dog. This was back in January in a fight televised on Sho Box as well. He then followed that up with another knock out win over journey man Franklin Gonzalez at the Resort World Casino in Queens, New York. I think he should take a little break and let that cut heal properly, before he gets back in the ring.

In the main event we got to see one of Mexico’s most promising prospects, in Joel Diaz Jr. facing off against Tyler Assestine from Ontario, Canada a solid prospect himself, with a good record of 14-1. The guy came to win he was tough as nails! He proved to be a stylistic challenge for the young Diaz Jr. Who is under the tutelage of Abe Sanchez, a veteran trainer, who also trains the feared middleweight Gennady Golovkin.

Joel won via unanimous decision and he went ten tough rounds for the first time in his young budding career. He managed the fight if you will, being the stronger puncher. He hurt Tyler in the last round with a resounding left hook to the body, but Assastine weathered the storm and took him distance.

What I took away from this fight is that he needs to work on his defense and stamina. He seemed to gas late and he was also cut and staggered at the very end of he eighth round, there were just 28 seconds left and he fought back well. It was a lack luster performance for Diaz Jr. and Sanchez will tighten up his technique and improve that stamina as he continues to work with the kid in the California Mountains.