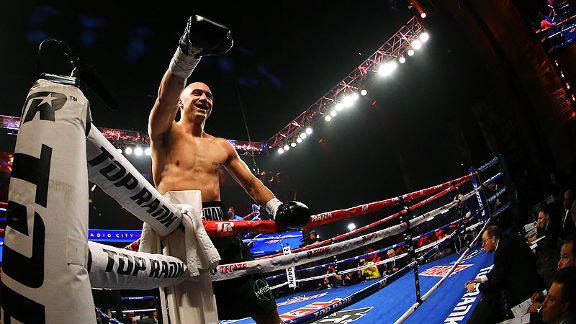 In the opening bout of the Tim Bradley vs. Juan Manuel Marqez pay-per-view, Sean Monaghan (19-0, 12 knockouts) took on Anthony Smith (14-2, 10 knockouts) in a light-heavyweight scrap. As the first fight of the night, the match-up undoubtedly served its purpose. Featuring some solid back and forth and a violent end, fans couldn’t ask for a better lead-in fight.

At the sound of the opening bell it was clear that Anthony Smith was about as determined to win as he was out of shape. Coming out as the aggressor, Smith made Monaghan look timid in the ring with his relentless barrage of looping hooks that managed to land about as often as they were blocked. Although Smith was clearly pushing the pace, Monaghan did his best to keep his composure and let Smith’s pace be his own undoing. With a heavy reliance on a stiff jab, Monaghan didn’t win the earlier round, but his game plan was slowly coming to fruition.

Things didn’t look much better for Monaghan going into the second. With both fighters storming out of their corners, Smith would use his size to begin muscling Monaghan around the ring and along the ropes. Smith continued in his predictable but effective flurry of hooks until Monaghan brought the fight back to the center of the ring and hurt Smith with a pair of sneaky hooks. Just as Smith was finally beginning to seize the momentum the bell signaling the end of the round went off.

In the third round it was clear that Monaghan’s confidence was brimming about his performance in that last round, and judging by the look of anguish on Smith’s face, even he could tell that the end was inevitable. Sensing probable defeat, Smith came out especially reckless and aggressive at the start of the round. As he unloaded power shot after power shot, Monaghan relied on boxing and movement to weather the early storm. Eventually Monaghan responds with his own right hand that briefly stumbles Smith, and from that point forward things didn’t look good for the European. Monaghan continued landing blow for blow, and after a solid 30-sec to one-minute of absolute teeing-off on Monaghan, the referee called an end to the bout.

It wasn’t a huge win for Monaghan, but it certainly was a win nonetheless. With Smith being regarded as little more than a club-level fighter, it’s still too soon to gauge Monaghan’s potential among other light heavyweights. Still, with his desire to face a top-1o opponent next, the test Monaghan so desperately needs may come forward sooner rather than later.