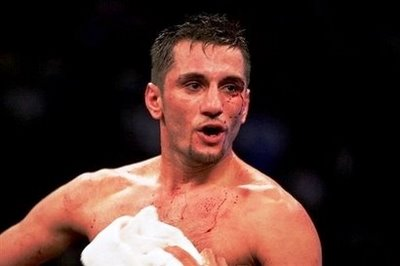 “I wasn’t offered the fight,” Sergio Mora wrote Thursday afternoon via e-mail in response to a question many had been asking, why isn’t he fighting “Triple G” Gennady Golovkin? Mora earned a knockout win on the untelevised portion of the Andre Ward undercard in Ontario, CA, over a largely unknown fighter and heavily dangerous Milton Nunez. The fifth round stoppage of Nunez was Mora’s first stoppage win in five years since knocking out Calvin Green.

Mora stated that though his promoter Lou DiBella tried his hardest to position Mora to get the fight, things just didn’t align themselves. Instead, Golovkin will face Osumanu Adama, an opponent who has never been knocked out before and is not well known. Adama has struggled at the highest level with losses to Donovan George and Daniel Geale and had some confused as to why the fight was made.

I guess we can be glad that this fight with Adama wasn’t approved by HBO but Golovkin’s promoter said it will have some sort of US TV outlet. But why didn’t Mora at least get offered the fight with his background and the interesting style match up it may present? In any other case, Mora maintains a positive attitude stating that in 2014, he will be back stating, “I will get my shot son…if it isn’t [Golovkin] then it will be either Peter Quillin or Felix Sturm.”

As of right now, Sergio Mora does not have a fight scheduled.