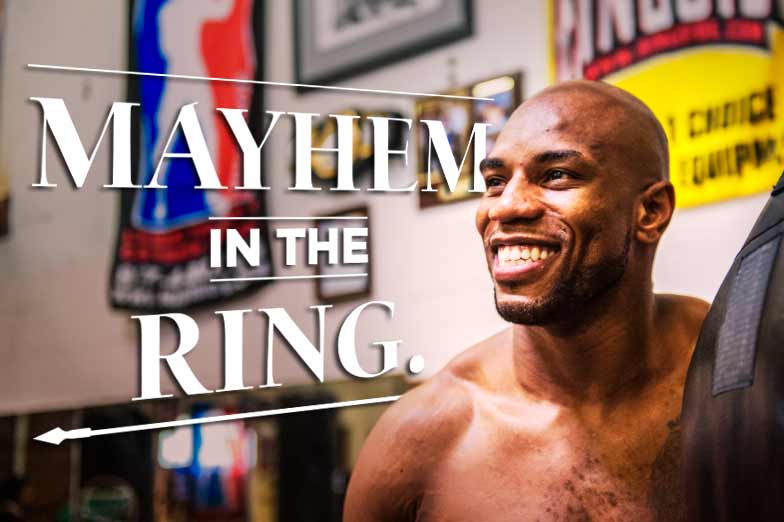 Seth “Mayhem” Mitchell (26-1-1, 19 KO’s), will step in the ring on September 6th in what will be his biggest test and a crucial step in his career to push himself to the next level. Before all of that happened, he faced great adversity inside and outside the ring that would test him as a fighter, and as a man.

In November of 2012, Mitchell lost via 2nd round TKO to Johnathan Banks in a bout which most expected Mitchell to win. Although the victory was sweet for Banks, who was filled with emotions after the passing of Emmanuel Steward, it served as a wakeup call for Mitchell. A call that you cannot walk through every opponent and there is very little room for errors in boxing.

Leading up to the Banks rematch, Mitchell suffered the biggest loss of his life that could destroy any human being mentally. Mitchell’s wife was 34 weeks into her pregnancy when she felt a sharp pain in her stomach and proceeded to the doctor’s office, only to find out that the child she was carrying was no longer alive. Mitchell rushed to the hospital in time to catch the still birth of his son.

“He looked just like me too,” said Mitchell. “Everything happens for a reason. I’ll drive myself crazy to keep wondering why it happened. God has blessed me with two beautiful children. Some people out there don’t have kids and have had numerous miscarriages or can’t get pregnant. It sucks. I’m not saying that I don’t say, ‘Why?’ But I realize that we don’t control everything.”

“I felt good. I had a lot happening in my life during that time. My main focus was to go out there and get that ‘W’, and that’s what I did. I’m used to running through my opponents and I know it wasn’t the most fan-friendly fight, but I was happy with my performance because I had a game plan and I stuck to my game plan,” said Mitchell.

Though the fight was not fan-friendly, Mitchell learned from his past mistakes, and was not always going to open up to a counter-puncher like Banks. “If he was going to let me win the fight with my jab then that’s what I was going do. The bottom line was, I needed to win that fight. Without that victory, I wouldn’t be back on Showtime.”

On September 6th, Seth Mitchell will step up against the greatest challenge to date in his career against heavyweight contender Chris “The Nightmare” Arreola in Arreola’s backyard, Southern California.

Both fighters need a fight of this caliber to push them to the next level of their careesr and despite the fact that many people feel that Al Haymon fighters do not face each other, that is far from the truth. “I need a fight with a big name and Chris Arreola is a big name and we both happen to be signed with Al Haymon,” said Mitchell. “This is a fight I actually wanted a year ago. It never came out in the public eye because I am not a Twitter or a Facebook thug or anything like that but it’s a fight that I wanted.”

When the fight happens, don’t expect for the fight to last long as both of these fighters pack heavy hands and can put opponents out. Mitchell prefers to let his fists do the talking in the ring than to talk in the build up to the fight, but that does not mean that he lacks confidence. “It’s a fight that I am going to win. I am very confident that I am going win. I am very confident that this fight is not going to the scorecards. Arreola talks a lot. He is going to continue to talk and I am going to continue to prepare for him and on the sixth I will be victorious. There is no doubt in my mind that I am not going to win this fight.”

For Arreola, this is will mark another chapter in stepping up to another heavyweight fighter, who can punch but will he fail as he did every other time according to Mitchell? “Every time Chris Arreola has stepped up, he has lost. Whenever he has faced anyone on an even playing field, he has lost. He has done nothing spectacular.”

A fight against Arreola is no walk in the park though. Danger lurks with every punch that gets thrown and one punch could change everything in a heavyweight fight. “Anytime you’re in the ring with a heavyweight that comes forward and let’s his hands go, there is always danger. Whatever he comes to the table with, we will be prepared. I hope he knows he is going to be in a fight. I’ma get in that ass on the sixth.”