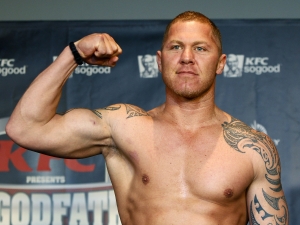 On November 22, Shane Cameron and Kali Meehan are set to go head to head in a heavyweight title fight that will see one relegated to history and one move forward potentially to a world title.

Never before has one fight in New Zealand been so important to two boxing families.

Kali’s son, Roosters player Willis Meehan has now joined the card for his pro debut whilst Shane Cameron’s career may very well end on the night. In a well matched fight such as this, as Kali Meehan puts it – “there will be violence”.

The return of the SUPER 8 last man standing tournament will see the best line-up of cruiser weights seen in Australia and New Zealand. Our eight Cruiserweights will go head to head in seven 3×3 minute rounds to find one SUPER 8 champion.

The format is fast paced, explosive and incredibly competitive making it a crowd pleaser for both event and fights fans.

Table prices start from $5,995+GST, and offer a great opportunity to host your clients for Christmas.

Don’t miss this epic night of entertainememt and explosive boxing. Perfectly timed for your Christmas event – Make sure you are there to witness Shane Cameron vs. Kali Meehan a heavyweight stoush 20 years in the making.

I look forward to seeing you on November 22.