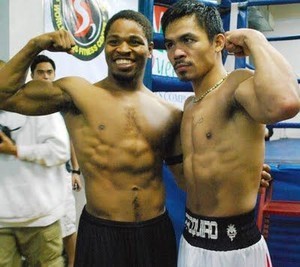 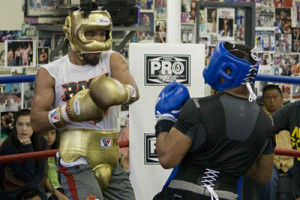 Despite coming off his first professional loss, welterweight Shawn “Showtime” Porter believes that he is ready to get back into the ring against the best in his division. The Las Vegas native see’s himself as top opposition for the likes of Manny Pacquiao, whom he shared the ring with during sparring.

Porter (24-1, 15 KO) held the IBF strap for eight months before he lost it to the U.K.’s Kell Brook (33-0) by majority decision in August. During his championship reign, Porter was considered a legit contender to Mayweather and Pacquiao due to his athleticism and work rate that yielded victories over Devon Alexander and Paulie Malignaggi.

In a recent interview, Porter told Tha Boxing Voice that he believes Mayweather-Pacquiao is a great fight adding, “Maybe I can get the winner.” When asked if he was officially challenging Pacquiao, Porter answered confidently:

“Come on now, that’s an official challenge any day man. I think you know, just being in the ring with Manny I know that I can compete with him,” Porter said. “I know that I can beat him. So I think that that’s a great fight for fans to see even if they think, ‘Oh well Shawn lost his last fight,’ does not matter man. I’m still healthy, I’m still fit and I’m still ready to get in there with the biggest and the baddest and prove myself so that’s a great fight.”

Porter is young and hasn’t sustained heavy damage in the ring with the exception of the occasional cut. He’s also a decorated amateur and has a lifetime trainer in his father Kenny Porter. Although he’s no longer a titleholder, Porter’s resume holds more weight than Pacquiao’s recent opponent, Chris Algieri, a kick-boxer turned boxer with no amateur boxing background.

If a fight between Pacquiao and Porter ever happened their similarities in styles could make for a memorable fight. Both fighters like to leap in with punches while leaving themselves available to counter shots. Both have extreme work rates and would surely spend most of the fight trying to outland the other.

As for his next fight, Porter is anxious to remind the world how talented he is during Spike TV’s Premier Boxing Champions card on March 13th. Porter will be fighting Roberto Garcia (36-3, 22 KO) on the undercard of Andre Berto versus Josesito Lopez at the Citizens Bank Arena in Ontario Calif. Porter knows the excitement he brings for his fans and promises to not let them down.