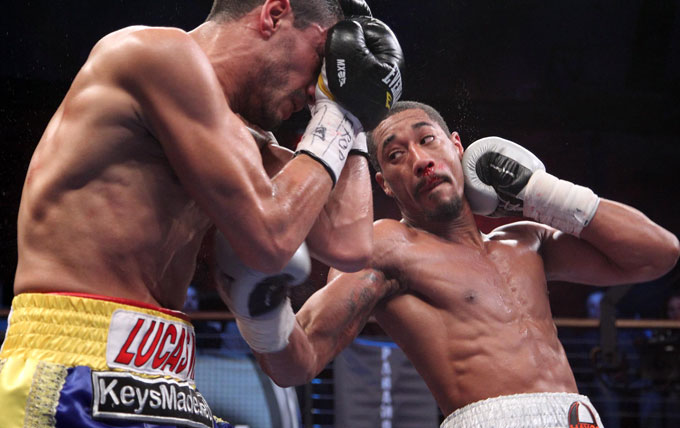 ShoBox kicked off the night with a junior welterweight bout between Raymond Serrano and Emanuel Taylor. Serrano started well establishing his jab but gave up on it towards the end of the first round because Taylor started countering him. In the third Taylor found his own jab and ruled the round, hurting Serrano at the end of it with a hard left hook. Mid fight was all Taylor as his confidence gained larger. He landed flurries of short hooks and used his jab to set them up. Another thing Taylor did well was change his Jab up. He would mix it up well between having to the body and head.

The second half of the fight was no different. Taylor landed a long combination and had Serrano out on his feet, so the ref jumped in and stopped it. Taylor wins by TKO in the sixth. I was impressed with Taylor. He has a great jab and solid Philly shell defense. Taylor also gave him a lot of different angles and knew when to step on the gas.

The main event was between Demetrius Andrade versus Freddy Hernandez. Andrade came out like he had bee hives on each hand as he swarmed Hernandez with combinations. Hernandez is trying to walk his man down but Andrade did a good job at moving and fighting while backing up. By round 3 Hernandez found a way inside and finally landed a couple meaningful punches but Andrade didn’t allow him to stay there for long. Hernandez barely got a shot off due to all the volume punching by Andrade.

While the punches Andrade were throwing weren’t really powerful, he did land enough of them to really swell up Hernandez’ face mid- fight. The hardest punch that Andrade landed was at the end of round 5, when Andrade landed a hard straight that put Hernandez back on his heels. Hernandez came to fight but he was severally outgunned. In round 6, Andrade landed a right hand to the top of the head and down went Hernandez. Hernandez got up quickly but was also noticeably wobbly.

Andrade was throwing all kinds of punches as if Hernandez was target practice. This was a step up in class for Andrade and I would say he passed. Hernandez walked into a stuff uppercut that froze him and had him seriously hurt. Hernandez made it to the final bell. Andrade notched a unanimous decision.

Andrade showed a lot in this step up for him. He could hang with some top tier 154 fighters but he struggles to make that weight. I wouldn’t be surprised if this is his last fight at junior middleweight. I look forward to seeing him again, definitely a champion in the making. Don’t forget to tune into ‘Tha Boxing Voice Radio Show’ every Thursday and Sunday evening. Follow us on twitter for all your boxing news @ThaBoxingVoice and me @lucasbiggers213