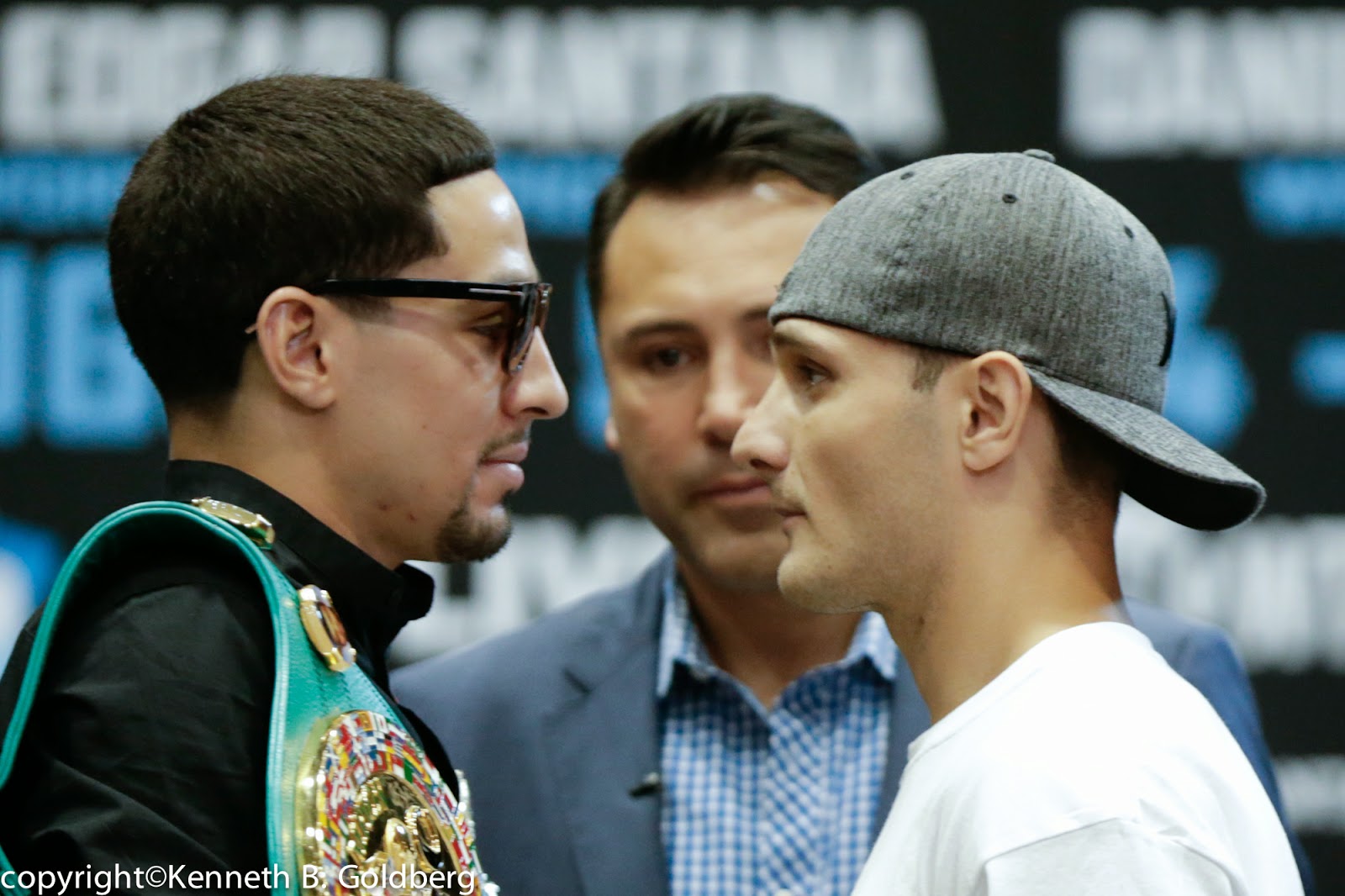 In 2014 Showtime/Golden Boy/Al Haymon have been walking a very thin line between showcase mismatches and entertaining matchmaking. This Saturday’s Showtime triple header from the Barclays Center in Brooklyn New York screams showcase mismatches in two of the three bouts.

One can only assume each fighter or a fighter, wanted more money and this card is a signing bonus or the cherry on the top for their purse when Danny Garcia and Lamont Peterson meet in the ring this winter.

Instead of wasting valuable premium cable budget money, they could have taken a risk on Fos Sport 1. With a larger platform the highlight reel knockout card could reach a bigger audience to help build the fight that people wanted see this Saturday. Sure it doesn’t make a ton of business sense in the short term, but the dreadful P.R. would be lessened had it landed on basic cable. No disrespect towards Edgar Santana and Rod Salka, but there are a line of fighters who are more deserving contenders.
Showtime played a major role for the banner year that boxing had in 2013. All that momentum has slowed and now seems to be headed down a steep slope that has fans of the sweet science screaming bloody murder.

I totally understand and accept Danny Jacobs fighting Jarrod Fletcher in a quest for a title shot in his hometown after beating back cancer. Plus Danny Jacobs is on a level below Peterson and Garcia, and is just now working his career back to a title after losing his first shot at a belt to Dmitry Pirog.

Overall Showtime’s co-features and main events have lacked name recognition or importance at the weight class. Fact is we live in a world were perception is reality, and the reality is many fans see Stephen Espinoza as a lap dog for Al Haymon. From the forums, to social media, and majority of callers for my podcast, most of the sentiment has been negative. Not just for this card but negative vibe towards Showtime in general.

This scribe is in the minority when I say that Showtime hasn’t been the pile of hot trash that many think.

Most of the media see this topic as low-hanging fruit and can’t help to pile on with the rest.
Pretty much all of the negative attention has come before the fights. It seems the media and fans have spent too much time on perception, ignoring the importance of entertaining matchmaking. Final judgment without including the final results doesn’t make much sense.

For example, Garcia vs. Herrera, Matthysse vs. Molina, and Guerrero vs. Kamegai, were all falsely labeled as one-sided. Stevenson vs. Fonfara was supposed to be a prelude that turned out to be a surprise. Even last August, Mares vs. Gonzalez and the last two Leo Santa Cruz opponents were ripped by the boxing world. The result was Seda and Mijares giving Leo all he could handle or at least a tough fight that went the distance.

Now a fight like Keith Thurman vs. Julio Diaz had no business being a main event and should have been an opening fight. Don’t get me wrong, some of the complaining has been right on the money and fans should stand up for their hard earned money being wasted.

Some of it comes from Haymon/Mayweather hate that exists throughout the sport. The HBO/Top Rank vs. Showtime/Golden Boy beef is responsible as well. Because when HBO has a comparable card that could be labeled mismatches the fans and media barely make a peep.

HBO has invested in Golovkin and Kovalev and both have seen their fair share of mismatches. The HBO fight of the year for 2013 could have been trashed an easy night for Bradley facing an ESPN level fighter in Provodnikov.

Although Showtime has taken a step back this year, it’s not as far as people think. The departure of Richard Schafer has slowed Golden Boy this summer. Saturday will be the first Oscar-in-charge card and only time will tell how Showtime and GBP adjusts to ever changing boxing landscape.

Now that the important stuff is out of the way, let’s talk some boxing from the Barclays in Brooklyn. Danny Jacobs can see the light at the end of a tunnel that saw him KO’d and even worse, in the hospital fighting a vicious bout with cancer. In 2010 Danny had every reason to withdrawal versus Pirog with the sad news of his grandmother passing on fight week.

Jarrod Fletcher was in line for Gennady Golovkin’s strap but funny, HBO didn’t approve him as an opponent. Like I said before, I don’t have an issue with this fight because neither fighter has a solid name on their resume. It’s an ok fight for yet another alphabet soup. My only issue would be an ongoing issue with belts but that’s a different article.

Lamont Peterson and Danny Garcia should win convincingly setting up a winter battle between the two possibly at the same venue.

Edgar Santana has a good win against Josesito Lopez but has lost four times. Two of those losses came early and can be dismissed. The other two are the reasons why he shouldn’t be in the co-feature with a world class fighter.

Rod Salka is 19-3 with only 3 of his wins coming by knockout. Whether he thinks he lost all three or not, two of them would be considered bad. He scored a nice win over a prospect which was apparently enough to convince Espinoza and the powers that be that he deserves a shot at the best junior welterweight.(Don’t tell that to Mauricio Herrera)

Salka has some solid boxer-type skills with good movement. He and Edgar could make the last two fights of the night interesting or competitive for a little while. After all this is boxing, there is a good chance will see both marquee names pressing for a stoppage. Plus the styles of Garcia and Peterson lend themselves to entertaining fights and both take some punches to get theirs in.

Showtime is not lighting the world on fire with every card (neither is HBO) and should be called out when they try to push hot garbage on us. However, not every fight made will involve marquee names or be uber important to the division. It can’t be forgotten that entertaining matchmaking is just as important as any other factor, and needs to be added into the equation of success. At the end of the day the result will be what stands the test of time.