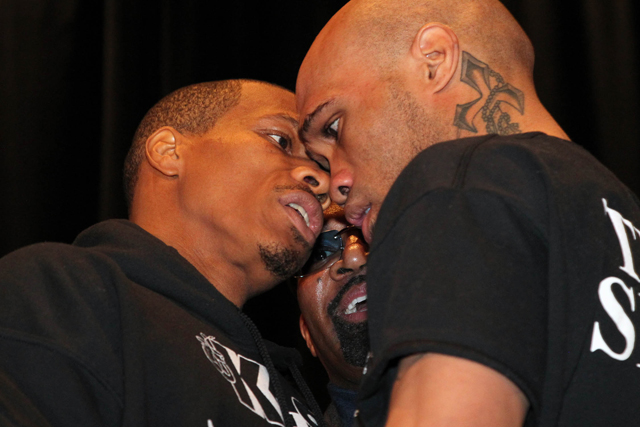 Mayweather, already the highest paid athlete in the world (Forbes, 2012), also discussed the groundbreaking contract he recently inked with Showtime Networks Inc. and its parent company, CBS Corporation.  The deal, a unique revenue-sharing arrangement between SHOWTIME PPV and Mayweather, will enable him to fight up to six times over a period of 30 months, with the first mega-event taking place on May 4, 2013 when Mayweather will fight Robert “The Ghost” Guerrero.

Here’s what the participants had to say on Thursday:

“This cat right here [Smith], the last time he came to Detroit, he was scared to death.  I could see a fear in him.  He went home and started Tweeting.  He’s a Facebook gangster and now he comes back to my city with The Money Team and all of a sudden he’s hard.  I bark outside the ring, but I bite inside the ring.  They can’t fight for him.  I’ll give him the business and hopefully his boss [Floyd Mayweather] will step up.

“I want to thank SHOWTIME.  It’s been over 10 years now since my first fight on SHOWTIME and to think that my first world title shot is coming on SHOWTIME is unbelievable.  It’s an unbelievable feeling to be on network TV so many times, even when some of the times I knew I was going to be on the ‘B’ side, they always had my back.  It’s 10-plus years of a great relationship and it’s only fitting that this first world title shot to try to become the first-ever Vegas born champion is on this network.

“What can I say about Eddie Mustafa.  I hadn’t fought in 18 months and I didn’t know if I even wanted to fight anymore.  He told me to come to the gym.  He would call me and make sure I was OK.  I grew up fatherless so he was like a father-figure.

“This crowd here is full of K9 supporters and that’s great.  If you guys came to Vegas, it would be full of Ishe Smith supporters.  This isn’t football, this isn’t basketball.  You can’t yell at a quarterback and have him hear you.  It’s just me and him in the ring.  He has to fight and I have to fight too.  The one thing about it is he’s going to get touched.  I’ve had almost 30 pro fights and I’ve never been down, never stopped.  Bottom line is, it’s one-on-one.  We’re going to strictly box hard. I’m coming to fight and I’m taking that title back to Vegas.  That’s the way it’s going to be.

“It’s like my boy Chico (Diego Corrales) used to always tell me, it’s a war of attrition.  You have to go out on your back.  I’d rather go out on my back than leave without that title.  He can question everything about me, but come Saturday night we’re going to see who’s the real champion.”

“I need to thank Floyd for everything he’s done for me.  I’ve had a lot of different promoters in my 13 years as a professional and no one has treated me the way he does.  I did communicate with him when he was incarcerated and I carry this letter that he wrote me whenever I fight.  He said, ‘You are a champion.  Thank you for helping me get ready for the most important fights of my career – Miguel Cotto and Shane Mosley.  Have that same attitude when you spar and that same determination and no one can stop you.  I’m proud of you.  Always continue to think about your family when you’re training and push yourself to the limit.’  That’s just half of what he wrote me.  At the end he said, ‘I promise I’m going to get you a world championship fight when I get out of jail.’  So we went 18 months without a fight and in less than a year we are fighting for a world championship.  I don’t see how anybody can say anything bad about Floyd Mayweather or Mayweather Promotions. I’m not going to do any of that damn barking.  I don’t need to do that.  This Saturday it’s going to be a good show, it’s going to be a good fight.”

“I’m a Detroit native.  I love Detroit.  This is where I’m from.  This is where I caused trouble, did good, did bad.  Detroit runs in my blood.  I’m going to come out Saturday and do what we do best and that’s fight and put on a good show.  We want to put on more shows out here in Detroit, so this is the time to show that we’re ready for whatever.  We’re ready for Derrick Findley, whatever he comes with.  He’s going to rush, do whatever he has to do, so we’ll be ready for it.

“I come from the dog house.  This is where we put all our hard work in.  We’re in Vegas putting in the work, running, doing everything we have to do.  We have the best trainers and there’s nothing we’re not ready for.  We train hard.  It’s another day and we’re going to put on a good performance.”

“I just want to thank J’Leon and Floyd Mayweather for giving me this opportunity.  I’m used to going into the lion’s den; I’m used to fighting guys in their backyards, but that stuff doesn’t matter to me.  I just got to give it everything I got in the ring.  Take advantage of the opportunity and get the win in his hometown.   I’ll definitely be ready and I can’t wait until Saturday.”