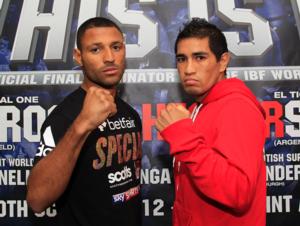 On Saturday night at Sheffield’s Motorpoint Arena, unbeaten welterweight star Kell ‘The Special One’ Brook will face Argentina’s Hector ‘El Tigre’ Saldivia in a fight which will leave the winner as number one contender for the IBF crown. Brook, who overcame the tough Carson Jones in his last fight back in July, will be hoping to send Saldivia back to Argentina with a beating as he aims to prove he is one of the stars of the 147lb division.

Kell Brook’s talent is not in question. Fighting out of the famous Ingle Stable, which has produced world champions in Prince Naseem Hamed, Johnny Nelson and Junior Witter; Brook has beat the best in Britain and has slowly worked himself into the position of becoming a mandatory challenger for a world title. Impressive wins over Lovemore Ndou and Matthew Hatton have helped Brook gain an army of fans, and come Saturday, the Sheffield Arena will be bouncing with Brook supporters, and I’ll be among them.

He has terrific hand speed and accuracy, good power, great reflexes and as he showed against Carson Jones, a great chin and heart. He is very nearly the complete package, and looks ready to take the world by storm.

However, there are still doubts over his fitness levels, and after scraping past Jones with a majority decision verdict in his last contest, it is vital that Brook looks the business in this fight. Major flaws in preperation and making weight clearly troubled Brook, as after dominating the first 6 rounds, he completely gassed out and was nearly stopped by Jones in the final round of their contest. A broken nose didn’t help matters, but the way Brook faded was alarming.

Thankfully, those issues have now been addressed. Team Brook has hired a strength and conditioner as well as a nutritionist to help improve the Steel City man’s preparation, and with it, his stamina. Brook has apparently looked like a different animal coming into this fight, with gym mate Richard Towers telling me that Brook is ‘machine ready’. Only time will tell, but Brook already looks in fine condition ahead of Saturday night. The weigh in on Friday and the fight itself will of course tell us more.

As for Saldivia, he is an unknown on British shores, probably due to the fact that he has rarely fought outside of Argentina. However, with only 2 defeats on his record and a great knockout rate, he will no doubt be a massive test for Brook, at least on paper. A closer look at Saldivia’s record shows that he hasn’t fought opponents of the calibre of Brook, so this will be a step up in class for the Argentine without a doubt. The fact he is coming all the way to England to fight could also play a part, I can guarantee that Saldivia will never have fought in an atmosphere he is likely to experience on Saturday, so we could see that have an effect.

However, his knockout ratio is impressive, regardless of the opponents, it still takes power to knock a man out, therefore Brook will be in for a tough night. Saldivia marches forward and throws big shots, so expect Brook to be under pressure from the first bell. However he is also vulnerable to shots coming the other way, he has been stopped twice before, so if Brook is on song, we could see a stoppage win for the Sheffield man.

I expect the fight to play out in a similar way to the Carson Jones fight, the difference being that Brook, hopefully, won’t run out of gas. If he manages to set a pace from the off and keep that pace up, I have no doubt that his class will tell, and we’ll see him claim a stoppage win, if not a unanimous points verdict. Saldivia should be tailor made for Brook, he keeps coming and that should leave Brook with an opportunity to pick his man off, wearing him down late, and forcing the referee to intervene.

However, if Brook’s demons come back to haunt him, and he finds himself low on energy, we could have a shock on the cards. Saldivia will keep coming and he will get to Brook if the Sheffield man can’t keep his workrate up. Saldivia won’t want the fight to go to points with the fight being in Brook’s home city of Sheffield, so he will throw the kitchen sink at Brook if he gets the chance. It’s important that Brook uses his Mayweather Esq jab to keep Saldivia at bay, throwing combination and making sure that his work rate stays high. I hope we see an improvement in stamina come Saturday, because Brook is no doubt going to need it if he is to get the win.

But whatever happens, it should be a great fight. Brook goes in as favourite and rightly so, and a win will propel him onto the world stage, where the winner of Randall Bailey and Devon Alexander awaits, and the IBF world title with it. Let’s hope that Saturday night is a special night for the ‘Special One’.