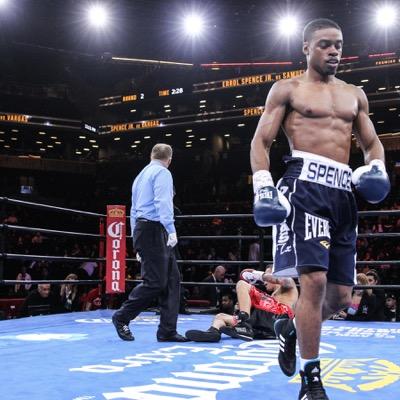 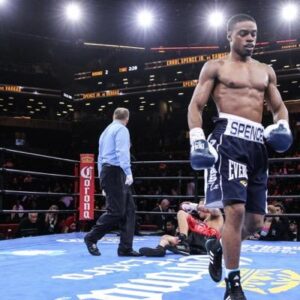 Welterweight contender Errol Spence Jr. (17-0, 14 KO’s) will return to the ring on September 11th on the undercard of Adonis Stevenson vs. Tommy Karpency on Premier Boxing Champions on Spike TV at the Ricoh Coliseum in Toronto, Ontario, ESPN’s Dan Rafael revealed Monday.

“Sept. 11 on Spike, Errol Spence Jr. is slated for the co-feature. Opponent TBA. Stevenson-Karpency is the main event,” Rafael said on Twitter.

The main event is going to be interesting. While a majority of the boxing world has criticized the matchup, I’d like to think it would be something just above a mismatch.

Tommy Karpency is a solid boxer. He moves very well, and his combinations are always on point. However, how long will he be able to box close until Stevenson catches him with a hard shot?

We know Stevenson possesses tremendous power in his right hand, and the American has never faced someone with power that even compares to a guy like Stevenson, so it’s going to be a tall task for Karpency.

Add that Karpency is unknown to most boxing fans – that’s going to make it a tough fight to promote – especially one outside of the United States.

Errol Spence most recently fought on the undercard of Broner-Porter at MGM Grand in June. In a fight where he was originally scheduled to fight Roberto Garcia, the Mexican fighter backed out of the fight due to weight problems – the second time in three months that he’s had to pull out of fight for the same reasons.

Two days before the fight, it was reported that Garcia weighed around 175 pounds.

Spence went on to face replacement fighter Phil Lo Greco, who put up a good fight for as long as it lasted, but was clearly affected by the lack of preparation, and referee Robert Byrd halted the bout in the third round.

Floyd Mayweather Jr. tried to allure WBA World welterweight champion Keith Thurman to a fight with Spence, but he didn’t want any part of it, reiterating time and time again that Spence doesn’t deserve to fight him until he beats some quality fighters.

With that being said, Spence needs to fight a solid opponent on September 11th. However, the fight is just over a month away, so there’s not a lot of time to pick an opponent if they haven’t done so.

If Spence wants to fight Thurman, do what Thurman did in an attempt to get a fight with Khan, and fight a common opponent. Spence is ranked No. 8 by the WBA, while Diego Chaves is ranked No. 9. Thurman knocked out Chaves in 2013 to claim the interim WBA World welterweight title at the time.

If Spence fights Chaves and beats him in better fashion, that could impress Thurman enough to take the fight.

Most of the top dogs in the division like Khan, Porter, and Thurman are chasing Mayweather. With the undisputed pound-for-pound champion in negotiations to postpone his retirement by three fights – this may or may not hurt Spence’s chance to land some big fights down the road.