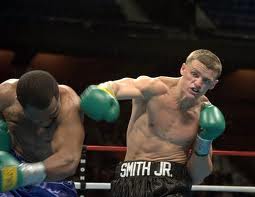 Founder and CEO of Star Boxing, Joe DeGuardia is proud to announce that he has entered into a long term promotional agreement with power punching Light Heavyweight Joe  ” Irish Bomber” Smith Jr.,  of Long Island, NY.

The “Irish Bomber” was elated with the signing and stated: “I’m so excited to be with Star Boxing and fighting on Long Island at the Paramount “.

Smith is known for his tremendous power but has also displayed the ability to box.  He has had close to 50 amateur bouts that included titles as a Junior Olympian, NY Metro champion, and in 2008 Joe won the prestigious NY Daily News Golden Gloves Championship.  Smith is also a member of Local 66 Laborers Union and has already established a very big following.  He is managed and trained by the Jerry Capobianco, who stated: “With the help of Joe DeGuardia’s team at Star Boxing I feel Joe Smith Jr will be another World Champion from Long Island “.  Joe wants to follow in the tradition of past great Irish/American fighters such as Jack Dempsey, Billy Conn, Mickey Walker, and Gene Tunney to name a few.

Star Boxing head Joe DeGuardia had this to say about his new signing “I’ve had my eye on signing Joe for a while as he is an exciting fighter who is a perfect fit for our fans at the Paramount.  The Light Heavyweight division is a very good one and we have had our share of champions in that division (among other, Star Boxing promoted Light-Heavyweight champs Antonio Tarver and Lou DelValle) and I’m looking forward to Joe Smith becoming another or our World Champion’s in the very near future”.

Smith will make his Star Boxing debut on December 20th, 2014 at The Paramount in Huntington, NY.  Smith hopes to follow in the footsteps of fellow Long Islander and current WBO Jr. Welterweight champion Chris Algieri who on November 22nd battles Manny Paquiao, live on HBO Pay Per View from Macau, China.  Algieri made The Paramount his home having fought there eight times which eventually led him to the mega fight he is in.  The Irish Bomber hopes to do the same and have the same success as Algieri did.