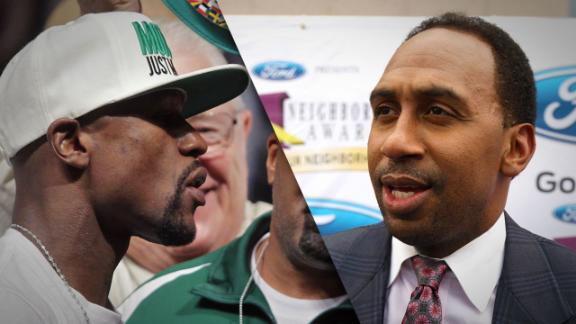 You have to give credit to Stephen A. Smith for staying true to his opinions and the conjecture that supports them. Regardless of whether or not you disagree with Smith on a particular subject, you can’t say that his convictions are baseless.

Smith is one of the few voices that has continued to call out all parties involved with making the Floyd Mayweather Jr. and Manny Pacquiao showdown a reality. He is happy that the fight is finally made, evident by his recent twitter posts.

“Yyyyyyyyeeeeeaaaaaaahhhhhhh!!!!!!!! It’s on and poppin. See y’all in Vegas on May 2nd,” Smith tweeted from his official Twitter handle, @stephenasmith.

Smith has always praised Mayweather as the best fighter of his generation and stuck up for Mayweather in the past when critics suggested that he was the cause of the botched negotiations with Pacquiao. However, after repeated failed attempts Smith began to assign rightful blame to Mayweather Jr. In some instances, he made sure Mayweather Jr. shared blame with Pacquiao, in others he outright challenged Floyd to make the fight a reality.

Smith, at times, was critical of Mayweather Jr. to the point that you’d almost forget that he was actually a fan. But Smith was always a fan and nothing changed his opinion of Mayweather’s prowess, but being a practical man in a prominent media position like Smith – co-host of ESPN’s First Take—it was necessary for him to do all he could to influence and persuade the fight to happen.

In all likelihood, Smith probably didn’t factor in the fight being made, but he added to the strong and passionate voice created by those in the media willing to challenge anyone unwilling to make this fight a reality. For this reason, you have to applaud Smith because he took heat for his criticism of Mayweather Jr. In fact, Smith was blasted by Mayweather Jr. himself at one point.

However, now that the fight is made Smith’s narrative reflects his continued stance and belief that Mayweather Jr. will dictate the Pacquiao fight by completely schooling the Filipino fighter.

Smith later tweeted in response to Skip Bayless’ (First Take’s other co-host) breaking news that First Take will hit the road and broadcast live from Las Vegas in the lead up to Mayweather-Pacquiao, also stating that they’d do a post-fight show on location as well.

Bayless commented that he couldn’t wait to be part of the coverage and festivities.

“Neither can I @RealSkipBayless. Believe what you want. Dream on! Come May 2nd, a clinic will be conducted. School is in session, Pacman,” [email protected]

It doesn’t matter if you agree with Smith, what does matter is that he has stayed true to his word and expressed his opinion in a clear and decisive manner, which is sadly considered heroic by today’s media standards.

Smith isn’t “back on board” the Mayweather bandwagon because he never left, and he isn’t flip-flopping because he never flopped his flip. His opinion is the same as it always was and he is willing to call it the way he sees it, he always has.