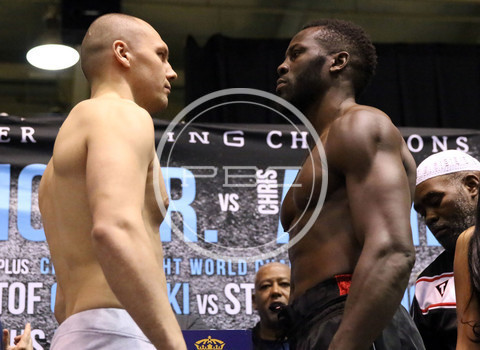 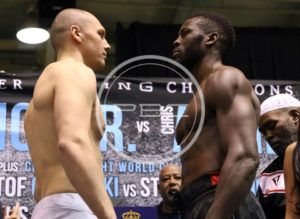 After climbing to the top of the division twice, some fighters might pack it in and call it a career, but former two-time cruiserweight champion Steve “USS” Cunningham insists he still has the hunger to become a three-time titlist by beating Poland’s Krzysztof Glowacki Saturday night in Brooklyn.

The bout is on the undercard of the Errol Spence Jr. – Chris Algieri welterweight matchup, and both fights will be live on NBC. Cunningham has not fought for a world title since 2012 and at 39, he may be too old to keep up with a young champion like Glowacki. But Cunningham insists that he is motivated to win another title for himself and his family.

“Three-time champion sounds great,” Cunningham told Tha Boxing Voice’s Nestor Gibbs. “I got a lot of drives. I got four mouths to feed at home. I got four kids; I got ideas we got businesses we want to start. I got to win this belt man; I got to keep it going.”

The 39-year-old Cunningham (28-7-1, 13 KO’s) is making his return to the cruiserweight division after a four-year hiatus campaigning as a heavyweight. He was small for a heavyweight, never weighing over 210 pounds according to boxrec, but his heart and discipline is big enough for any weight class.

His biggest accomplishment over 200 pounds was knocking down current heavyweight champ Tyson Fury three years ago in a non-title fight. Cunningham is 12 years older and weighed 40 pounds less than Fury but his championship experience shined when he took advantage of an early opening to floor the younger man in the second.

Ultimately, though, Cunningham succumbed to the weight and youth of Fury and was KO’d in the seventh round. Now Cunningham is fighting Glowacki, who is closer in size but is still ten years younger and boasts an unblemished record of 25 wins and 16 KO’s. History has proven that older men can get hurt moving down in weight to fight a young buck, but Cunningham insists he can still make 200 with ease.

“I fought [Antonio] Tarver at 203,” Cunningham said. “Three pounds, that ain’t nothing. I was a cruiserweight fighting heavyweights. The weight part is easy. Now the fighting part we got to make look easy.”

The Tarver fight was Cunningham’s latest ring appearance, and although Tarver played the role of the older fighter at 46, Cunningham was unable to outwork or hurt the veteran and had to settle for a draw.

Glowacki, the champion, was a relative unknown but when he got up from a sixth round knockdown to go on and KO Marco Huck in the 11th he displayed the kind of courage and determination needed to be a top fighter.

If Cunningham does not possess the drive with which he spoke to Nes about, expect another big name win under Glowacki’s WBO belt. But if Glowacki is satisfied with making it to the mountain top he may find it harder to stay there when the old hand comes back looking for another title.