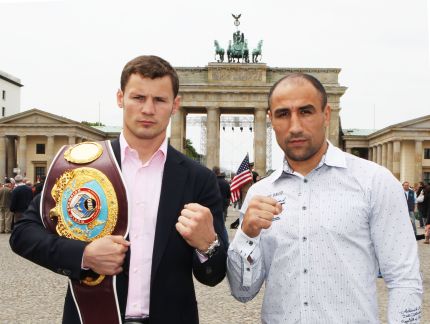 Boxing history is littered with fighters who dominated a division, yet for various reasons felt the need to step up in weight only to find life considerably tougher.

Once one of the most feared middleweights in the world, the German based Armenian vacated his IBF crown to join Showtime’s 168 lb Super Six tournament.

The Super Six provided Abraham an opportunity to showcase his skills to global audience against the best super middleweights in the world. However the power that was so intimidating during his four year reign at middleweight wasn’t as effective in his new surroundings. Naturally bigger men, Andre Ward, Carl Froch and Andre Dirrell were all able to outbox him with his only significant win at the weight coming against Jermaine Taylor.

On Saturday the 25th Abraham has one last chance to carve a legacy for himself at super middleweight when he faces Russian born Robert Stieglitz for the WBO strap at the 02 World Arena in Berlin.Stieglitz will be making the 6th defence of his belt which he won by 11th round TKO victory over Karoly Balzsay. With more than just his title at stake, a win over Abraham will secure star status in his adopted homeland of Germany.

The champion has been susceptible to power shots in the past having previously been stopped by Librado Andrade and Alejandro Berrio. But he has improved greatly since going on an unbeaten run spanning over four years against admittedly, lesser opponents. For Stieglitz the game plan is clear; utilise the jab to keep his opponent on the outside, maintain a tight guard, use his superior footwork to get out of trouble, and avoid getting pinned on the ropes at all costs. If he can execute this he will hope to have picked up enough rounds to get the decision.

Abraham on the other hand will attempt to bully the naturally bigger man by walking through his opponent’s shots to land his own and make it a toe-to-toe test of chins. A common criticism of the Armenian is that he can be outworked, something which he claims he will correct in this bout.

Verdict: Stieglitz will take the early rounds but Abraham’s pressure will eventually be rewarded with a late stoppage victory.