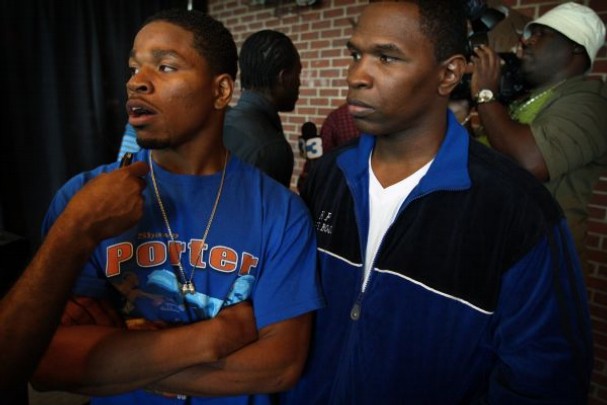 There’s been a lot of the unknown when it comes to the IBF Welterweight title fight between reigning champion Shawn Porter and mandatory challenger Kell Brook of the United Kingdom. It seemed to be all set and ready to go for August 9th at the Barclays Center in Brooklyn, New York but Golden Boy has finalized that card without the bout between Porter and Alexander.

This week, news had came out that the contracts had not been signed and there was an issue with Brook wanting Porter to take random anti-doping tests. Eddie Hearn, Kell Brook’s promoter told RingTV.com that the contracts have been signed and the date was the only issue that needed to be determined. Shawn Porter and his father who is his trainer and handles his career clarified certain things on their end on Tha Boxing Voice Radio Show.

“As far as I’m concerned, we’re still fighting Kell Brook with a date to be determined,” stated Ken Porter. “Everything is signed, now the only issue that needs to be hashed out is the date.”

As it pertains to the drug testing and working with Victor Conte, Ken Porter laughed and said, “We’ll do any type of testing they won’t. In fact we advocate for testing, we were trying to get random testing for the Malignaggi bout.” Shawn Porter acknowledged his father’s sentiments. “The thing people don’t know is I’ve been taking these tests since I was an amateur. I welcome it because I want to show the world I’m a clean fighter and I want to do the best to know that the guy on the other side of the ring is clean too, so bring it on,” explained the Cleveland fighter.
Ken Porter jumped in to clarify the Conte association. “It’s true what Roger Mayweather says, ‘most people don’t know sh*t about boxing’. Just cause you train in a facility doesn’t mean you’re working with that said person. A lot of people train in the Mayweather gym but are they Mayweather fighters? No. Yes, we train down in Conte’s facility but I’m his trainer and I train Shawn and truth of the matter is, Victor’s not involved in our training.”

This past weekend on Showtime, there was a graphic displayed with the next Showtime telecast on Aug 9th abbouncing the fights at the Barclays Center with no mention of Porter-Brook. So naturally, questions arose if the fight was happening and if Porter might have pulled out of the fight to land the coveted Mayweather fight on September 13th.
Shawn Porter smiled and said, “You know I got those text messages, and I smiled and in the back of my mind I was like, ‘Maybe Mayweather did pick me’. Because you dream to fight the best but that wasn’t the case. We just got a change in date and as far as I know I’m fighting Kell Brook on a date to be determined.”

Porter was asked if he felt Brook was not taking the fight because in the past there were multiple cancelations of his mandated fight with then IBF champion Devon Alexander. To that thought, Shawn Porter said, “I don’t think so. I think if I’m him you don’t get chances to fight for a world title every day in this division. You don’t miss an opportunity to win a title and unify with the other champions. So I think we fight him, just don’t know when.”

The Porter camp has been in session for about 5 weeks and the team wants to remain active. They don’t feel fighting twice a year is a good enough so Ken Porter is urgent to get a date for his son or else it’s time to move on.

“I don’t think they’re going to strip us because we want to fight Kell Brook. But if I don’t get a date in two weeks, it’ll be time to move on and find another opponent because we’re not trying to be inactive, we want to defend our titles and unify,” explained Porter.

Two names the immediately came to mind were Robert Guerrero and Keith Thurman, who are also advised by Al Haymon. Shawn Porter’s had one higher opinion of one than the other.

“Guerrero was a guy that came to mind before but after his last performance he shouldn’t be demanding people to fight other people in order to fight him. I mean look at his face. It was a good fight but he shouldn’t have been in that close of a fight taking all that punishment,” explained Porter. On the Thurman fight, Porter sounded happy and said, “I’m glad the fans are calling for that fight. I think the fight happens down the road because it has to, two undefeated guys in their prime, it’s bound to happen. But I leave that in the hands of my father and Al Haymon, I do the fighting.”