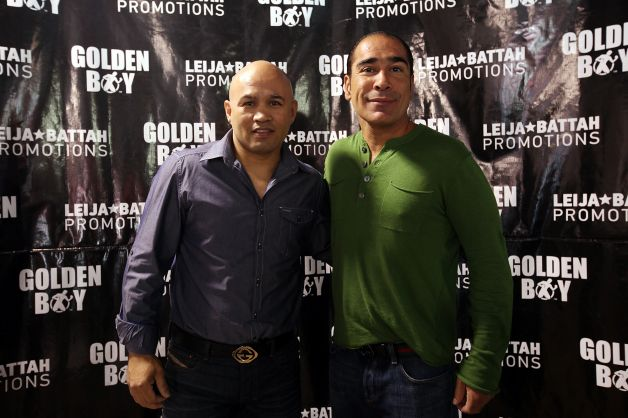 The month of April will be an exciting time for boxing fans in Texas, primarily due to the fact that Saul “Canelo” Alvarez will be squaring off against Austin Trout in their much anticipated junior middleweight unification bout in San Antonio, televised live on Showtime. The buzz surrounding this fight is overwhelming but for the Hispanic population in San Antonio and its surrounding areas, the appeal is reaching a particular magnitude that can only be appreciated by a very defined demographic of fans.

It is no surprise that Hispanic fans play a vital role in the success of the fight game, but the geographic limitations placed on the sport has left South Texas out of the loop as it pertains to major promotions involving high profiled features. However, that unfortunate trend could begin to shift for the better.

San Antonio has played host to some big time fights in the past and Texas has seen its share of major stars roll through, but the situations have always been circumstantial and borderline gimmicky. In reality, the demographic suggests that South Texas could be a tremendously beneficial location with venues of all shapes and sizes.

Those are the sentiments of former world champion Jesse James Leija and Mike Battah, the two have established Leija/Battah Promotions and the company is campaigning to enlighten the boxing world on the potential that exists in the city they call home.

Leija belongs to a minority of successful fighters who have secured financial stability and created an avenue for themselves to remain prosperous during their career after boxing. That success is no coincidence, Leija is a smart individual and he has followed the blueprint that every successful businessman must abide by which is surrounding oneself with other smart, hardworking people.

That is where Mike Battah comes into play, the other half of this successful team. The two originally paired up 9 years ago when Mike began training under the tutelage of Leija. The intent was never to compete, but what formed was a dynamic that only exists between the bonds of physical scrutiny captured in a boxing gym.

The two put on their first card a year ago and they are now preparing for the 8th promotion, followed swiftly by their 9th.

Battah was born in El Paso, Texas, then moved to Miami at age 12, only to return at age 19 where he has remained as a resident of San Antonio. He describes himself as a salesman, but it is apparent that he plays many roles in the promotional company and he isn’t impervious to burning the midnight oil.

Both Leija and Battah are hands on in this venture, but turning a profit isn’t the only driving force behind their determined work ethic. These two men are completely committed to the evolution of Texas boxing, they work tirelessly towards bringing major promotions to the Lone Star State. Canelo-Trout could be a catalyst for future endeavors involving big time fights.

“We have the Juan Diaz fight on the 13th in Corpus Christi, Texas and the Canelo-Trout on the 20th. After this I think we’re going to get a lot more fights, both mid-size and large because the ticket sales have been amazing and Golden Boy is seeing that,” Battah said in a phone interview with Thaboxingvoice.com.

Mike knows his market and he is even more in-tuned to the shortcomings involved in boxing when it comes to live shows, but he is also aware of the effects associated with taking advantage of frequent trips to South Texas.

“You see empty seats at shows, they take the TV money and the sponsorship money and they’re happy with that, I don’t think that’s good for the sport. In San Antonio, you’re in the biggest area in the US for boxing, that’s what I think and the numbers proved it, in 3 days we were at 10,000 sold and in 7 days we were at 20,000 sold.

“I think Golden Boy is crazy excited about this area. You have all the border cities that can come to San Antonio like Dallas, Houston, Corpus Christi, Austin, Monterrey, Mexico City, Guadalajara to name a few. People will come from all of those cities because San Antonio is a good centralized zone for boxing,” Battah said.

Mike believes in the product that he and Leija are pushing, but he also believes in the fans of the area. Texas boxing has always been a thriving force, but over the years it has lost some of its luster and Leija/Battah Promotions is in the business of bringing it back and surpassing all expectations. The end result is constantly evolving because Battah and Leija realize that potential and both men are capable of bringing these goals to fruition.

“Our goal isn’t some fixed idea because we have the ability to evolve, I know what kind of work I’m capable of and I can sell. I’m a salesman and my mission is to sell seats,” Battah said.

Leija/Battah Promotions has made real strides with their live shows, they’ve taken elements of a social event and placed them in the arena on fight night. I’ve been to a number of their promotions and they have successfully transformed the mere boxing card into an event. This is no accident, the company believes that it is important to combine facets of a classic show with the kind of ingenuity that appeals to the potentially new customers unfamiliar to the inner-workings of the sport.

“I think if you put a little more extra effort or some of that nightlife into it then we’ll start gaining a different type of clientele along with our existing. We’re gaining more customers because it’s becoming a trend and we’re putting together a different atmosphere. We have a lot of fight fans out there and they appreciate the way we are combining an experience that appeals to new fight fans as well as existing ones.”

While Leija and Battah are the backbone of the company, they’d be the first to admit that their team is made up of intelligent and fully capable individuals. The reason they’ve come so far so fast is because the company is united on bettering the sport, specifically as it relates to bigger, more frequent live fights in South Texas. They are doing their part to give the fight fans what they want, it’s up to the fans to show their dedication by supporting both the large and mid-sized cards.

Leija/Battah Promotions was persistent in its pursuit of Canelo-Trout, we Texans have them to thank for its location. Mike is doing his part to ensure the event’s success and that could lead to a consistency in major events in the area; the fact that Canelo-Trout is taking place during “Fiesta” – San Antonio’s annual Spring Festival – could help matters. The future of Texas boxing does hinge somewhat on Leija/Battah Promotions, but lucky for Texas’ fans, Mike and Jesse are on our side.