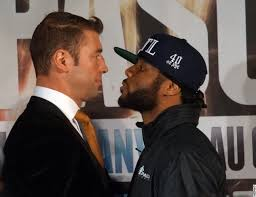 Tomorrow HBO boxing broadcasts their 1st event of the year as the sport of boxing will be spotlighted in the country of Canada for a bout between 2 lightweights, as Lucian Bute will square off Jean Pascal in the Bell Centre in Montreal, Quebec. This will be one of the biggest boxing bouts for Canada because even though neither of these boxers was technically born in Canada, both reside there and are big stars in the country. Both are also former world champions that took hard losses and are trying to make their way back to the top of the hill. These 2 were supposed to fight May of 2013, but surgery to the left hand of Bute to remove bone fragments postponed the fight off until now.

Lucian Bute comes into the bout with a 31-1 record with, 24 KOs, with his biggest wins coming against Librado Andrade and Glen Johnson. He has fought all but 6 of his fights in Canada, but it was his last fight outside the friendly confines that may have put a halt to his career. Bute was looked at as 1 of the top 3 Super Middleweights in the world. He was 30-0 with 24 KOs, and then he ran into a lion’s den. He made the trip over to the UK to fight Carl Froch and was blitzed by an over aggressive Froch, who was seemingly pumped up from the crowd. Bute was rocked in round 3, rocked in round 4, and then the ref stepped in as he was getting rocked in round 5. The referee began counting and it looked like he was stopping the fight but it was eventually stopped by Bute’s corner. After a unanimous decision against Denis Grachev, he hopes that after a year from the ring, he can start to recover what he lost in that battle against Froch.

Jean Pascal will be entering the ring with a record of 28-2-1 with 17 KOs, his biggest win coming against Chad Dawson. He has fought all but 2 fights in Canada, with 1, like Bute, being a loss to Froch in Nottingham, UK. His other main foe has been Bernard “The Executioner” Hopkins. They fought to a draw in a fight I felt Hopkins slightly won in December of 2010, and then fought a rematch in May of 2011, a fight that Hopkins won a little bit more convincingly. Since then, Pascal has only fought once in 2012 and once in 2013, totaling only 5 bouts since 2010. He had a fight against Tavoris Cloud that was supposed to be in August 2012 that was canceled due to a hand injury by Pascal. Then he was supposed to face him in August 2013, but then Cloud pulled out with an injury of his own. With fights against Aleksy Kuziemski and George Blades, this will be Pascal’s 1st significant fight since the Hopkins fight in 2011.

This is a pretty even fight in my opinion. Other than both losing to Froch, Pascal has fought higher level fighters in Hopkins and Dawson and holds a 1-1-1 record in those bouts, while Bute has more depth in his resume in terms of less journeyman and no names. Bute has faced a lot of middle tier boxers, or gatekeepers if you will. I think this fight will go the distance, which will make the cards very interesting with both guys being top Canadian boxers.  Pascal will step into the ring as the favorite, but I’m throwing my vote towards Bute 1 more time. I picked Bute to beat Froch in UK and with the onslaught that Froch unleashed in front of that crazy crowd, he had no chance. I still think he is a top 5 light heavyweight and this is his chance to prove it. So I’m going with Bute by split decision, but no matter which way it goes, it’s an interesting fight to kickoff the year on HBO Boxing, enjoy the fights.