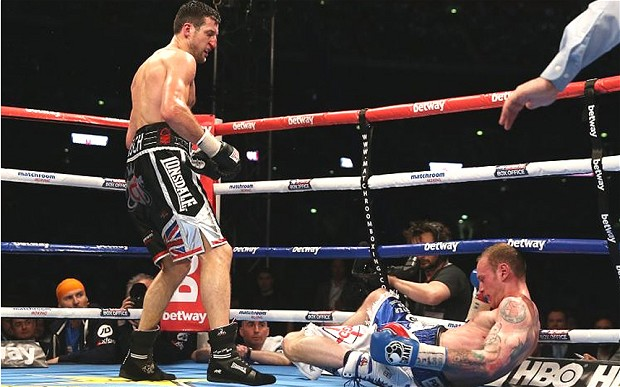 This past week saw a lot of different moving parts. A lot of fights going on and a lot of speculation going on. Big fights loom closer and bigger fights start to come into the picture. All of it added up to boxing thriving and being alive and well for all of us fight fans.

Froch vs. Groves II – The atmosphere at Wembley was off the chain for sure. The fight was basically even going into the 8th and was actually sort of lackluster to be honest but the end was absolutely spectacular. Froch solidified himself as an all-time great British fighter andmust see TV for sure. I’m hoping to see him and Chavez Jr. get it on in Las Vegas in an all action fight that would be a surefire hit.

Degale vs. Gonzales – Degale looked great in the short affair and proved that he has some power that many don’t believe he had. The stoppage was a bit too quick but the writing was on the wall and he was well on his way to winning the fight regardless. He is in line for Froch next but I wouldn’t mind seeing him fight Ward since neither one has a dance partner at the moment. I think his awkward style might give Ward a little trouble.

Donaire Won I Guess – In a dreadful fight in Macau, Nonito got a win over Vetyeka. He still doesn’t look back to form but at least he didn’t lose. If he fights Walters he might get KOed for real. Nick Walters destroyed Vic Darchinyan on the undercard and looks to be the real deal.

Money vs. T.I. – First is was a physical altercation at Fat Burger and just yesterday ThaBoxingVoice announced on twitter that Floyd posted a sex tape of T.I. If a friend is going to cause this much drama you might want to think about getting some new friends Money!

Molina must fight K9 – The IBF has said “HELL NAW” to Carlos fighting a Charlo and K9 once again has a title shot. I definitely don’t feel that Charlo (either one) deserves a title shot at all but I truly don’t want to see Molina vs. Ishe Smith! I find it hard to believe that any other decent named fighter can’t buy their way in to fight for the IBF belt. Furthermore I am not even sure Molina can get back into the USA with his immigration issues so this fight might need to be help in Mexico or another country that allows Molina in for a fight. Canada might be the most logical place since Molina has a Chicago background and K9 has the Detroit fans up there. I guess it can be placed on Hopkins vs. Stevenson as the 1st televised fight if they are desperate.

Martinez vs. Cotto Super fight inches closer – This is going to be a good fight! The animosity that Martinez has is the same kind he had for Chavez Jr and we know what happened to him. I think Cotto is going to get a natural but whoopin. He does not have the chin or durability of a Chavez Jr. and once he starts getting tired in the second half of the fight you can cancel Christmas on him. From the minute the fight was announced I said Sergio would win and I am sticking by that. To look like a monster against Delvin Rodriguez is one thing, but to fight the true middleweight champion of the world is another. Even on a bad leg I have Martinez winning. Cotto is just too small and not durable enough.

Povetkin vs. Charr – Just imagine what Povetkin could of done if Wladimir would not have been allowed to go WWE on him in Russia. The combo that he landed on Charr was just brutal! I would love to see Povetkin in with Stiverne, Jennings, Wilder or any other top heavyweight. He has skills even if he lacks height.

Speaking of Wladimir – Klitschko wants to unify the heavyweight title. The WBC says he has to wait until the mandatory in Wilder is fulfilled. Stiverne has 2 options, fight the real heavyweight champ for legacy or fight the mandatory and pay a huge step aside fee. With Wilder we can all see the power is real and he could easily KO any heavyweight he steps in the ring with. On the flipside he has never been in with a B+/A- fighter like Stiverne who has real power himself. If Wilder’s chin is not good he will be KOed like Arreola. So what do you do? Can Don King even pay the step aside money to Wilder to set up the unification? I highly doubt it. King has defaulted on a number of purse bids over the last few years because he couldn’t come up with the money.

I say we see Stiverne versus Wilder and Wladamir versus Pulev as a double header on ESPN and the winners meet on Showtime or HBO while the losers fight on the under card. In a perfect world it would all be on ESPN or a non-premium network but I got to keep it real. Most people are in the boxing business to make money and unifying the heavyweight titles is big money.