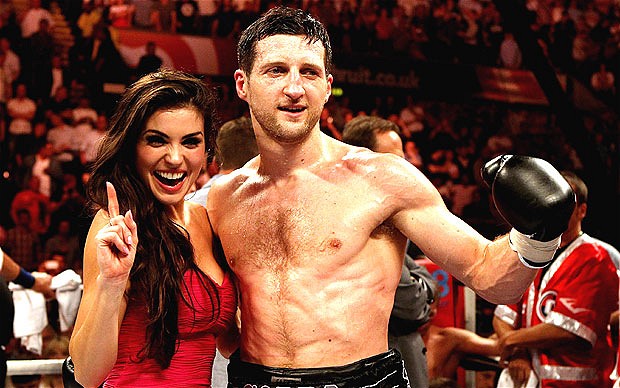 Carl Froch was once again successful in knocking out George Groves in Saturday’s rematch of their November 2013 title fight. The rematch took place in front of 80,000 fans packed into the famous Wembley Stadium in Wembley, London.

The bout was promoted with hopes of being a fire fight, similar to their first bout in which Froch TKO’ed Groves in the 9th round. The stoppage in the first fight was the topic of great debate amongst fans and media due to the fact that Groves took an early lead and was well in control of the fight. But Froch began to come on strong and scored a knockdown in the 9th. Groves beat the count but the ref waved off the fight even though Groves appeared to be in stable condition.

The outcome was much more certain this time around, although the rematch played out in a similar manner.

Groves came out to a huge lead while Froch seemed just as befuddled as he was in the first fight, perhaps more so.

Groves controlled the pace, the action, and the intricacies of the first four rounds. He was simply the better fighter. Froch, on the other hand, had little conviction in his punches and his footwork was all over the place.

Groves landed some hard right hands and connected with a few well balanced left-hooks that appeared to hurt Froch, although his granite chin wouldn’t allow Groves anymore advantage to capitalize off of and Froch maintained his game plan, as flawed as it appeared to be.

Groves was pushing the action and out boxing Froch. He was truly on his A-Game, picking his opportunities, clinching the moment Froch showed any signs of life, and disrupting Froch’s rhythm in a greedy manner.

However, Froch — a notoriously slow starter — began to turn the tide in the 6th. It was a drastic turnaround, but it was evident enough that Groves stopped letting his hands go as much, although he was a bit more conservative from an overall perspective than he was in the first fight.

Froch seemed to be building more and more faith in his punches and he was letting his hands go with more determination. Slowly, Froch began to close the distance and even though that allowed Groves to land some shots of his own it was apparent that Froch had faith in his ability to take Groves’ best efforts.

The right hand that landed on Groves’ chin in the 8th was sudden, but the momentum had certainly been building in Froch’s favor so it wasn’t a drastic turnaround by any means.

Groves hit the canvas with his leg wedged underneath his hip and he appeared to be out of it completely. The ref waved the fight before giving Groves the opportunity to beat the 10 count, but he was extremely shaky and there was serious doubt he’d have survived much longer and I don’t believe it was worth it to try.

Froch’s hand was once again raised in victory and he successfully held on to his IBF and WBA super middleweight titles, this time a round earlier than the first fight and without the stigma of the first stoppage. Froch proved he is still able to perform at a high level and his name and fighting style carry the kind of weight that make certain matchups intriguing enough to suggest his biggest fights are still to come.