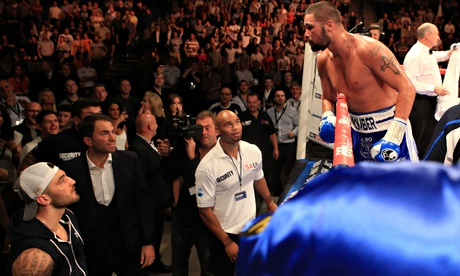 Like two solemn ships passing each other in the cool night under the moons glare which reflects off of dancing waves, these two while perhaps not embracing us with such a warm romantic image, are ultimately entwined. It could almost be poetry if they didn’t despise the very flesh that binds each others respective skeletal frame together.

For those who are unaware, there’s no love lost between these two. A press conference confrontation a few years ago before their first fight, an atmosphere thickened with a genuine undercurrent of spite rippling beneath it, was the catalyst for what is now dubbed Collision Course.

A weight drained Tony Bellew, graciously accepted the equally generous offer of an immediate street fight from Cleverly while the cameras flickered. And so, we have one of the spiciest grudge matches from these shores, arguably comparable to Froch vs Groves when referencing the amount of dislike between the two. The ensuing first fight they shared, a close; perhaps more technical than expected locking of horns, one I had a draw, was still fun.

The shots fired; darts hurled; sticks and stones lobbed between the two in the proceeding years, while never igniting with the same fervor, was still an enticing starter to any potential rematch brought to the table.

Enter Collision Course. A fight card constructed around the premise of a rematch between Cleverly and Bellew. A prequel if you will. They both had to pass with flying colours on this card, Lets look at Clev first…

Valori gives us his highlight moments not long after the opening bell. Sharp hooks, nice uppercut; fight could be a good ‘un. By the end of the round when Cleverly is putting his shots together bolstered by his usual impressive engine, the distant hope of any competition blinks its final light.

Cleverly marches forward in the 2nd, short compact punches, edged off with a snapping left hook deep into the ribs of the man in front of him. Delayed reaction; the pain sensors register the electrical signal fired through them, and Valori drops like the proverbial sack of spuds. The desire and ambition drawn straight from him, like death itself pulling a reluctant glowing spirit from a dying body.

Thanks to one single withering shot, the rest of the fight we can observe a Valori who walks through mud, uninspired, reluctant, it’s in effect, all over.

By the 3rd it’s now little more than a sparring session, Cleverly letting loose with the entire arsenal. At points, the fight is so one sided, Nathan and Valori are standing still trading punches as if there’s some kind of agreement between them, letting the Welshman have a few friendly free shots, until a hard left hook backs up Valori. After too much one sided work in the 4th a body shot crumbles the big man from Buenos Aires, who makes it to his feet but turns, looking for an escape ladder, it’s finished.

Nathan completes his side of the deal, now….

This Brazilian opponent seems a little more legit than Cleverly’s hurdle. There’s some interesting questions for Bellew as the fight gets into motion, despite Tony’s punches looking crisp and sharp. The Bellew attack is meeting little but Dos Santos’ high guard initially.

In the 2nd it’s all Bellew until a right hand breaks out from Dos Santos. Tony looks the faster fighter, Dos Santos the comfortable tortoise in his shell while Tony puts on a display of punches for the cameras that he’s been working on in the gym.

Warning signs flicker like an old hanging neon display in the 3rd however, the repeated right hands that are landing flush on Tonys head cause attention, especially as the responses from Tony are barely breaking Dos Santos’s guard. In the 4th Bellew definitely seems off pace, his punches while looking very heavy with a notable snap, are not touching the ripe melon between the iron padlocked guard of Dos Santos, despite the extra weight afforded to the shots at Cruiser, Bellew can’t split the defence.

Dos Santos showing for all to see why he is a man who’s never been knocked out before. Santos advances out of his posture with some sweet body shots which find a home on tony and also adds some right hands, finishing off a great round for the Brazilian.

5th round, Tony summons the hammer of Thor itself and draws the curtains on Dos Santos. A power left hook, enormous! It detonates on the face of Dos Santos. The obvious increase in strength at The Bombers new higher weight apparent. Dos Santos appears to wake up, a confused explorer on another planet. Lush pink flowers; several polka dot moons and interesting alien species. He is searching for some kind of clue at to where the f**k he is!

He finally makes it to dangerously unsteady legs on pegs and he’s saved more punishment by a soft hearted ref. A very classy finish from Bellew, even if the after fight theatrics between him and a grinning Nathan Cleverly, perhaps contained less of that said class.

Tony attempting to climb out the ring to engage a waiting Cleverly. A well choreographed post fight interview with both Bellew and Cleverly, of course intended to stoke fires for their rematch toward the end of the the year. The promoter Eddie Hearn poised in the middle, Pound signs lighting up his eyes like fair ground illuminations. Both men fresh from their fights, juices thundering through their muscles, grabbing the mic back and forth between the presenters gripped claw. like passing a hot rock. Great fun, good TV.