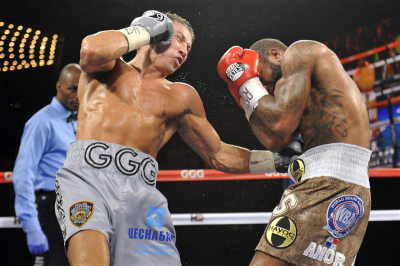 Those were the words of Gennady Golovkin, after another dominating knockout performance. A little over a year ago, I traveled 7 hours to see Gennady after I’ve seen multiple YouTube videos of a fighter that had thudding power, great footwork, and a knack to cut the ring off better than anyone. Needless to say after his destruction of Gregorz Proksa, I was immediately hooked. So the point was made to always try and go see Golovkin anytime he is to fight in the United States, he hasn’t disappointed.

From the bloody mess he made of Gabriel Rosado to the one punch knockout of Ishida, to the devastating body stoppage of Macklin, to him now taking out a durable Curtis Stevens, the GGG train keeps rolling on, but where does he go next?

“I don’t know I am champion, you see my fight, I want to fight the best I don’t know,” Golovkin said to me after his fight with Stevens.

With the middleweight champion of the world Sergio Martinez likely heading on a collision course with Miguel Cotto, and Peter Quillin on a rival network, those two names he mentioned may not come to fruition, not anytime soon anyway.

The plan is to be busy, to keep the train in motion, likely on a February 1st date in Monte Carlo according to his promoter Tom Loeffler. Now whether that fight will be on HBO is another thing in itself, but that won’t stop him from being active.

Like 2013 showed, Golovkin and his handlers want to stay busy, stay sharp. “Stay busy? It’s very good year for my record, I feel my strategy, my power, I feel good being busy. Yes, absolutely right. Its baby steps, I’m ready for big fights but won’t wait not fighting,” stated Golovkin.

With each performance, the seats on the train keep getting filled. With an announced crowd of 4618, he filled up the smaller room at MSG; Gennady is keen on one day filling up the newly rented big room where it hasn’t been sold out for boxing since Miguel Cotto fought Antonio Margarito in 2011.

It’s a thing of beauty when a guy from Kazakhstan and trains in California might become the next guy to own the Garden, a building historic for its boxing.

Steve Farhood who has seen his fair share of fights in the New York has bought a seat on ride and like all of us, wants to see Gennady get the bigger fights.

For a fighter who has the “Good Boy” moniker attached to him, it seemed like he fought mad on Saturday because of the pre-fight antics displayed by Stevens, holding a mock funeral of Golovkin before the fight. Stevens proved to be durable but in the end it was all for not as Golovkin who said it was just another day at the office.

“No I am champion, this is my game. He’s just challenger. Yes I have respect for everyone. Hey guys you see my fight, this is nothing for me. I respect for my challenger.”

In a sitting that moves with trains and subways, seems like the one will just keep rolling, next stop? The big room at Madison Square Garden?