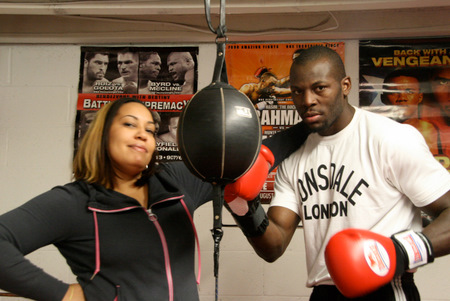 We have all heard the saying “Behind every good man stands a good woman.” Usually it is said in the context of politicians or news anchors, but how often do we get to hear about the other half of the boxers that we read about on this site?

As we all know, preparing for a fight is no easy feat. It’s usually six-eight weeks of no sex, a strict diet, and heavy workouts. One has to wonder what it is like for the women and children involved.

From Boxing Diva to Boxing Diva, I had the chance to chat with Elizabeth Cunningham, wife of Cruiser weight and soon to be Heavyweight star Steve “USS” Cunningham, and she gave us an inside look at what it’s really like:

Q: Tell us your story! How did you get to be Mrs. Steve Cunningham?

A: Steve and I met back in 2000 at the Biggs Morrison Boxing Gym in Atlanta, GA – I moved to ATL after graduating from Boston University and Steve moved there after getting out of the US Navy.  I was taking a boxing class just trying to stay in shape and he was training there as an amateur.  He asked me out to the movies and basically that was it, we have been together every day since then.  We joke that we could have gotten married right away, but it actually happened three years later (laughing). So now 12 years and three kids later, here we are!

Have you been with Steve throughout his whole career?

Yes, we have been together his entire pro career.  When we met he was still an amateur fighter, but turned pro shortly after we started dating.

How has the journey been for you?

It has been amazing.  We have been so blessed.  It’s been a roller coaster, no doubt, but I wouldn’t change a thing.  We both share the same beliefs and goals and we have always operated as a team.  I wanted him to be World Champion just as much as he did and so we made some sacrifices but all the time believing he would be champ.  For years, I worked full time to support the family so that he could focus on training, being the best and being ready for any fight that might come up.  And it paid off.  He’s a two time world champion and going for a third.  Now we work together, I am his business manager and we have other businesses and investments outside of boxing as well.

What is the hardest part of being the wife of a professional boxer?

For me, it is seeing my husband come up short in a fight.  Not because of the hype or his record or the money, but because he works so hard and always gives boxing his best and I just want the world for him, I think he derives it.  I hate to see him disappointed, it breaks my heart.  But at the end of the day we know that God has a plan for us, win, lose or draw so we keep it moving, but it is a process and there are some rough days after a loss.

As a mother, do you see your sons (Who are both adorable, By the way) taking up the family business?

Aw, thanks!  I have such mixed feelings about this.  Our boys are always in the gym, they have both grown up in the gym and working out is mandatory but fighting/competing is not.

We want them to have the skills and discipline but if they don’t want to fight, that is fine with us, I actually would prefer they didn’t, but on the flip side, if either one wants to try it, we’ll be behind him 100%.

Our baby boy Cruz, who is only one year old, really seems to have a natural gift in boxing; he loves the gym, loves hitting the bag, and is really good for his age.  It’s cute and funny right now, but scary too.  I think once Steve retires from boxing we’ll be starting all over again with the boys in the amateurs.  I hope I get a little break in between, I am not sure my nerves can handle it.

Can you give the reader an idea of what your routine is like on a fight night?

Fight night is one of the few times I actually ask myself ‘why do we do this?’. Just answering this question is giving me butterflies in my stomach.  But for me it is tough, I pray a lot because my nerves are shot and I find comfort in prayer and leaning on God.  That entire day we just lay low, Steve is resting mostly, we will have a team meal and prayer and then to go to the arena. Once there, I wait in the locker room with the guys until the ring walk, and then take my seat as he is entering the ring.  Once the bell rings, its fight time and for the most part my nerves disappear, watching him fight is like dream sometimes, and it is the longest 47 minutes ever!  I am so relieved when that final bell rings and there is nothing better than a victory!  After that we head to the locker room and then to the post fight press conference. By then Steve and all of us are starving and the next mission is to find some food (laughing).

What is going through your mind when Steve is in the ring?

I just want the fight to be over, win, lose or draw.  Of course I am praying for a win, but I am literally counting down the rounds and praying the whole time.  I try not to yell a lot because I want him to be able to hear his corner, but I’ll say stuff here and there.  I feel so proud watching him in the ring, he’s an amazing fighter and works so hard and is doing what he loves to do.  We have come so far I feel proud and blessed to be by his side through it all.

Is training camp as hard for you as it is for your husband?

It’s a sacrifice for the whole family and it can be hard, but we’ve have been doing this for a long time, so it’s just part of our life now.  Sometimes he trains at home and other times he leaves for camp.  Either way, I try to support him and stay out of his way at the same time.  I want him to be able to focus on the fight and rest when he needs to, and not have to worry about all the little daily stuff life brings.  But yea, it can be hard.

What is the vibe like in the household while in camp?

It can be a little more intense, but it is basically the same.  We have a silly family, we all love to laugh and have fun, so if Steve is training out of town, we’ll Skype so he can see everyone, we’ll fill him in on what’s going on here and make him laugh.  The kid’s will ask how long will he be gone and who’s he fighting, but we basically try to keep life normal as usual.

Is there anything you wish people knew about how hard it is to be a “Boxing Wife?”

There are a lot of sacrifices made by everyone involved and the business part is very hard.  Since I work with Steve as his manager, I am very involved in the day to day stuff and it is tough.  There is a lot of pressure on our husbands to perform to the best of their ability for every fight, and that can be hard to handle.  It is difficult to see your husband literally fight to provide for your family.

Which of your husband’s fights was the hardest to watch?

That is hard to say, but I think it would be the Adamek fight.  That was the first time he had ever been down three times in a fight and our first real loss, before that he had only been robbed.  He showed everyone watching that night what he was made of but it was so difficult to watch.  I was scoring the rounds and with every knock down, I knew it was getting harder and harder to win even though he was fighting his butt off.  It was just hard, as a wife you want all the fights to be one-sided walk-overs, not knockdown, drag out, fight of the year candidates! But man, that was a great fight.  Hopefully we’ll get to do it again in a rematch one day.

Are you ringside for every fight?

I am, I have been to all of Steve’s professional fights, including the Kelvin Davis fight when I was 8 1/2 months pregnant with our daughter Kennedy. I have flown to South Africa for a weekend just to see him fight, I spent more time in the air than on the ground, but the truth is I would do everything in my power to be there for him when he fights, we are a team and it is very important to both of us.