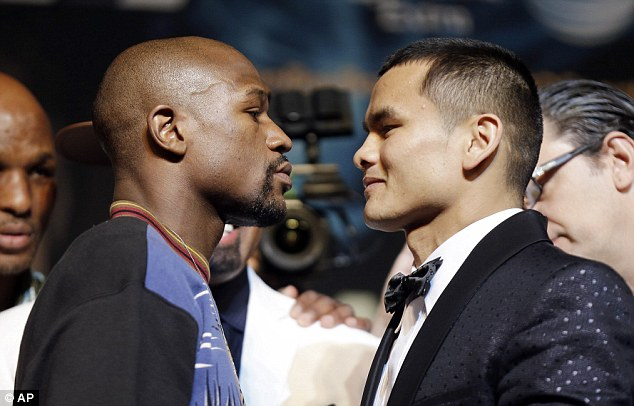 On Saturday, May 3rd, Floyd Mayweather returns to his usual stomping grounds at the MGM Grand in Las Vegas as Golden Boy Promotions/Mayweather Promotions, and Showtime will be live on PPV. The #1 pound for pound fighter in the world Floyd “Money” Mayweather will be squaring off against the hard hitting Argentinian “El Chino” Marcos Maidana. Also on the undercard will be Amir “King” Khan vs. Luis Collazo and Las Vegas, we have a problem, as Adrien “The Problem” Broner will try to rebound from his 1st loss as he faces Carlos Molina.

There’s really not too much you can say about Floyd Mayweather that isn’t already known, and not just boxing fans. His name is 1 of the few names in sports that is not just known within the United States, but all around the world. His well-known undefeated streak is currently at 45 and 0 after his technical domination of Saul “Canelo” Alvarez, no matter what CJ Ross thinks. The one thing that this fight presents is Mayweather has a 6 fight deal with Showtime and this is fight #3, Maidana maybe the hardest puncher that he will have to face throughout this entire deal. If he gets “caught” with anything early, will the glass be broken?

Marcos Maidana is truly a feel good story. After his beat down of Adrien Broner in San Antonio last year, he has been on cloud nine. The power punching Argentinian comes into the ring with a 35-3 record with 31 of his wins by way of knockout. He was a big underdog vs. Broner, caught him early, and Broner never recovered. The man who has stopped Victor Ortiz, Victor Cayo, Jesus Soto Karass, and Josesito Lopez will be trying to do the same to Floyd Mayweather, catch him with a shot early, and put him away before he can recover.

In my opinion, the “Blueprint” to defeating Floyd Mayweather contains 3 things that a boxer must do. First, he has to go to the body. The best way to wear down a boxer physically and mentally is constantly pounding the body, Maidana can do that. Second, he must use his jab. Even if it’s not too effective in terms of hurting him, using a jab will at least help you get inside and help to push Floyd in the way you want him to go, Maidana does have lapses of not using his jab, which will hurt him. Third, and most importantly, he has to cut off the ring. Floyd has arguably the best footwork in the sport to go along with the best endurance, if you can’t cut off the ring, you’ll be chasing him all day and eventually wear your own self out, this is what will kill Maidana.

Because of Maidana’s power, he will always have a punchers chance against anyone, including Mayweather, which makes him a bettor’s dream and nightmare. He can catch Floyd, shock the world, and would be fighter of the year with no other fights this year, but it’s not likely. He is too flatfooted at times in the ring and that plays right into Floyd’s strength, very similar to Rios vs. Pacquiao. Because of this, there is no choice but to go with Mayweather by unanimous decision. As for his next opponent, keep reading.

Amir Khan (28-3 with 19 KOs) was a finalist for the fight that Marcos Maidana is getting now against Floyd Mayweather. He was upset about it, but apparently not too upset to fight on the undercard. The biggest problem with Khan has always been his chin, but he knows that a win here could setup a Floyd fight in September or next May. Holding that golden carrot in front of Khan has to be a huge motivation for him this fight.

Luis Collazo (35-5 with 18 KOs) has been an average fighter for most of his career, losing every time he steps up in competition (Hatton, Mosley, even Berto). However he somewhat shocked the boxing world with his knockout of Victor Ortiz in January. Ortiz was supposed to be using Collazo as his stepping stone for his comeback, Collazo had other plans. His big advantage he will have is he is the bigger guy and a slight reach advantage.

The simple question about this fight is how weak is Khan’s chin. If he can stay upright for 12 rounds, I have no doubt in my mind Khan will win, on the cards. However, we’ve seen Khan go down several times, even in his wins, so the setup is in place for disaster for Khan. Collazo is either going to prove to be a late bloomer or Khan will pretty much setup his future fight with Floyd, I’m going with the latter and picking Khan by decision.

One other fight on the card that should be interesting is Adrien Broner (27-1 with 22 KOs) vs. Carlos Molina (17-1-1 with 7 KOs). Molina hasn’t fought since he lost to Amir Khan a year and half ago. It’s a soft return against a soft puncher for Broner, who is coming off getting blitzed by Maidana in his 1st loss. It’s also a move to a weight class that I think the 24 year old Broner should have gone to in the 1st place. His power should be more effective here and I think he destroys Molina and stops him within 5 rounds.

It should be a very interesting PPV in which it seems like all the fighters on the top 3 bouts are connected in some way. Khan wants a Floyd fight, Maidana just beat Broner, Molina lost to Khan, Collazo just beat Ortiz, who also lost to Maidana and Broner thinks he’s Floyd’s little brother. It’s all a little crazy in a way, but when it’s all said and done, as much as people want to deny  it, the PPV known as #TheMoment will be heavily watched and another event that should shape the next couple months of the sport we love, enjoy the fights.