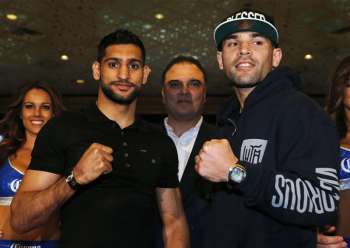 Amir Khan-Luis Collazo is probably the most intriguing fight on the Mayweather-Maidana card. 3 years ago it look like Khan was destined for greatness and Collazo was on his last legs in the sport. This Saturday it will be the cliche crossroads fight. Collazo trying to earn one more big fight and Khan trying to remain relevant in hopes of landing a Mayweather fight which he feels he deserved more than Maidana. Here’s how our staff see the fight playing out.

Collazo has momentum coming into this fight. He  just won the biggest fight of his career and he is starting to see that the grass is green on the upper tier of the boxing world. Khan on the other hand is always thinking of other fights instead of the one at hand. He’s coming off a year lay off where he didn’t even look good in his last two fights which were tune ups. He’s never fought at 147 and he will learn that the east coast native is going to bring all types of tactics into the ring.  Collazo by UD.

Amir Khan on skills alone should be the better fighter. But his downfall will always be his chin. He has been hurt and hit hard by a lightweight in Carlos Molina and was dropped by a very faded Julio Diaz. I never liked his marriage with Virgil Hunter as i think he has regressed with his new trainer. He’s also been inactive waiting around for a Mayweather fight plus he’s stepping into a new division.

Collazo ruined plans with his victory over Ortiz. Granted its not the greatest win in the world but it was against a name that was not ready to be back in the ring and that showed against Collazo. Its a tough test to get your feet wet against Collazo and that’s what Ortiz was trying to do. Khan being out so long and in a new division will try and do the same. He will fail. I see Collazo weathering an early storm and stopping Khan late.

I believe he will box rather than fight Collazo, and Khan is too fast for him.

Collazo burst back onto the scene with a knock out of Victor Ortiz. That win landed him a coveted spot on the co-main event of the Mayweather-Maidana under card against Khan. But how much did it actually prove? He made Ortiz, a known quitter who was coming off a long lay off caused by a broken jaw, quit from a decent hook.

For all the deserved sh*t we talk on Khan’s chin, I believe it takes more than that kind of shot to drop him. And even if you do drop him, unlike Ortiz, Khan will get up because he truly has heart.

Given the long layoff of Khan, the chin, Collazo’s style and limited punching power, I will go with Khan by decision with some very scary moments late. Basically it will look like Khan-Maidana.

Although, I wouldn’t be surprised if Collazo lands a shot that sounds like Stone Cold Steve Austin’s intro.

Collazo by KO within 10. Collazo has seemed rejuvenated and with his KO over Ortiz he should feel even more confident. Khan’s hand speed will give him issues at times but he should get through it for the stoppage win.

Even in its billing as co-main event, this fight does little to change the “weak” perception that this pay-per-view under card holds. Khan will be coming into this fight as a fully fledged welterweight and perceived as the weaker man. Even so, Khan will be the faster man, and the speed advantage will be apparent come Saturday night. Collazo will have his moments early, and maybe even rock Khan, but expect the Brit to work his way around a frustrated opponent to earn an underwhelming and rather unimpressive unanimous decision win.

Khan vs Collazo is in my opinion a 50/50 fight & that’s less because of what Collazo can do in the ring, and more because of the questions currently surrounding Khan. Although Khan has looked like sh*t in his last few fights, the move up to 147lbs could stand to benefit his beleaguered chin and allow him to be stronger overall physically. But, and this is really what the fight hinges on… It could also be a detriment as he will be facing a bigger stronger fighter and may not be able to take the big shots he will need to in order to succeed.

Luis Collazo is a rugged, savvy veteran aside from most likely being the bigger man in this fight & for a guy like Khan, who once comfortable can become predictable this can become a serious problem in the later rounds. So with all that being said I’m going with Collazo by late TKO or decision. I think he will eventually hurt Khan and stay in control thereafter if not finish him. Khan may look better at 147 than he has recently at 140 but I expect Collazo to be too smart and likely too strong for Khan. So I got Collazo on this one.

One the one hand, the KO pick is easy given Collazo’s power and Khan’s chin.  On the other hand, Khan has been in this position before, having to stay away from a power puncher.  This fight is much less about Collazo than it is about Khan, and how he seems to crumble in the face of power.  I believe history will repeat itself here, and Khan will get dropped.

This fight is tough to call because Amir Khan has been away for so long. Its difficult to tell whether the ring rust will effect him or has he truly advanced his skills under trainer Virgil Hunter. Nevertheless, Collazo is a skilled fighter with enough patients to catch Amir when he gets careless and tries to put on a show for the crowd. Collazo by split decision.

This match up is by far the most intriguing fight this weekend and the one I’m genuinely excited about.  I view this as a fairly even match up on paper with both fighters having certain advantages going into this weekends fight.  However, based on both fighters recent performances I have to go with Luis Collazo by decision or perhaps even by KO.

Although many people are thinking that Khan maybe over his head in this fight although he is the betting “favorite”, I do think that moving up in weight may help Khan find some much needed power that will keep Collazo wanting to box on the outside for most of the fight. This will play into Khans offensive game perfectly. I expect Collazo not to be able to keep up with the timing or speed and revert to counter punching for most of the fight. Although Collazo knocked out Ortiz, I still don’t view him as a power puncher. Khans speed will be a big factor in throwing a wrench into Collazo’s game all night and while I don’t think it will be a destruction, I expect Khan to win a clear Unanimous Decision.

Amir Khan will get the job done against Luis Collazo, it may not look pretty through the entire 12 rounds but I believe Khan’s superior in-ring capabilities will shine through, at least enough to win the unanimous decision.

Now this one was hard as hell for me. I think that this will turn out to be, fight of the night. Luis Collazo, my Boricua brother versus Amir Khan.  It breaks my heart to pick against Collazo. Two rounds against Victor Ortiz, (in a fight that I picked correctly!) ain’t enough to tell me where he is at physically.  Khan’s speed and underrated punching power, will be the difference in this one.  I think Amir will fight a smart fight for once, he will be technically superior and explosive.  UD Khan.

I really wanted to pick Amir Khan, but after watching tape it’s just too hard. Collazo loves to step shots by jabbing to the belly and then landing a hook as a counter, these two things are things Khan simply struggles with. I believe the fight will start out in the Khan’s favor, but Collazo will keep applying pressure and simply take the fight away from Khan.