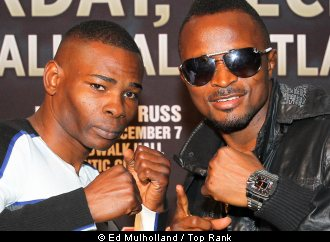 Tomorrow, HBO with Top Rank Promotions will be putting on a good boxing card from Atlantic City. Guillermo Rigondeaux will be fighting his 1st fight since defeating Nonito Donaire in April, as he puts his WBO and WBA super bantamweight belts on the line as he squares off against Joseph Agbeko. Also on the undercard will be the return of James Kirkland, as he will be fighting for the 1st time in 21 months to face the young 23 year old “Jersey Boy” from Passaic, Glen Tapia. The entire card will take place in Boardwalk Hall.

Guillermo Rigondeaux is 1 of the most skilled fighters in the sport. He was a decorated amateur and has had over 400 fights before turning pro and dominating everyone he has stepped into the ring with. He will enter Saturday’s action with an undefeated record of 12-0 with 8 KOs. His 2 best wins were against Rico Ramos and obviously, his last win against 2012 fighter of the year Nonito Donaire. The southpaw boxer is the type of fighter that probably won’t too many tickets with his style, being called boring by some, but if you are a fan of pure technical skill he is the man to watch.

The Ghana-born, Joseph Agbeko comes into the fight with a 29-4 record with 22 KOs. His biggest wins came against Vic Darchinyan in 2009 and a win in a rematch against Yonnhy Perez in 2010. His other 3 notable fights were the other Yonnhy Perez fight that he lost in 2009 and his 2 losses to Abner Mares in 2011. He is a solid fighter with good pop. He has never been known as an elite bantamweight, but he usually is solid and can put up a good fight. He has also never been stopped in his career, so you can expect this to go the distance.

Because Agbeko is a solid veteran and Rigondeaux is still not believed in by many people. Some expect this to be a close fight. I, on the other hand, think that Rigondeaux is the type of fighter that if you don’t stop him early, he will get stronger as the fight goes on. His amateur background is strong and it helps him know how to win decisions. Because of that, I’m going with Rigondeaux by decision. Even though Agbeko has solid power, so does Rigondeaux. He’ll be able to move around the ring well enough without taking a kill shot punch.

James Kirkland is 1 of the enigmas of boxing. He has enormous power, he doesn’t have great defense, so it makes for great visual fights, and when Ann Wolfe is in his corner, he fights with a no quit, fight till you die, type of desire. He’ll be coming into the ring with a record of 31-1 with 27 KOs with his 1 loss coming when Ann Wolfe wasn’t his trainer, in 2011 against Nobuhiro Ishida. After his last fight, which was a controversial DQ win against Carlos Molina, there was a black pill incident that came out on the boxing voice podcast:

This was all around the time he was supposed to fight Canelo Alvarez for his biggest payday. However, a “shoulder” injury was said to be preventing him from getting that illustrious fight. We have not seen him since

Glen Tapia is a rising young gun from New Jersey. He is an undefeated 20-0 with 12 KOs. Over his last 2 fights, he is not finally trying to raise his level of competition, but this is a big step up and it will be a good measuring stick on how fast this guy is climbing the ladder.  He has a good reach and a good jab. He must use both to keep Kirkland off of him. It will be interesting fight to see the 2 styles go against each other, like whether Kirkland’s charge forward, bull-like style, can be kept in check by Tapia’s jab and foot movement.

This could quietly be a fight of the night candidate. It’s going to be a power vs. speed, experience vs. youth, and the hunger to climb vs. the hunger to not be forgotten. If you feel this is the same Kirkland of old, then you go with him. He could hit Tapia with a shot and it ends him in round 1. If you think this is a shell of Kirkland’s old self, then you go with the hungry lion in Tapia to wear him down. I’m going to side that Kirkland still has something left, and with Ann Wolfe still in his corner, will eventually stop Tapia by 5th round stoppage.

Both fights should be competitive enough early to keep everyone’s attention. Also, no matter the outcome of either fight, between the card in Brooklyn on Showtime and this card in Atlantic City on HBO, fight fans are in for a full night of action packed boxing. Whether you like KO artist, technical magicians, young up and comers, or veterans that can outclass, Saturday night will be a night that fans of the Sweet Science can sit back, relax, and enjoy the fights.