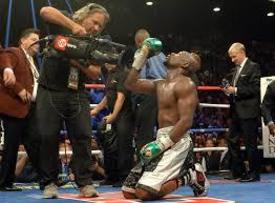 The World Boxing Council will decide by the first week of November what it is going to do with Floyd Mayweather’s titles.

There aren’t many in the boxing world who think Mayweather is going to stay retired, though, given that he has retired and returned to the sport on two occasions.

However, a problem still exists.

Although Mayweather “retired” after beating Berto, he is still listed as the current champion at welterweight and junior middleweight because he has yet to vacate his titles, and the WBC has yet to remove him from the position.

“He confirmed his retirement from boxing. For me, I think it would be something spectacular if he didn’t return, because it would mark [the commencement of a new ERA] for a new generation of fighters. He goes out on top, unbeaten with health and money,” Sulaiman said via BleacherReport.com

“If he can maintain that position, it would set an example.”

The WBC is considering either a tournament or a fight between the top two contenders to determine a new champion.

Garcia stopped Khan in the fourth round in July 2012 [when both fought at 140 lbs.] to retain his WBC title while snagging Khan’s WBA belt.

While a decision while be made by the end of the week, the topic will likely be brought up at the annual convention, which will be held in Kunming, China November 1- 6.

“We’ll define a plan at welterweight and super welterweight. Perhaps there will be a tournament in both divisions or order direct fights. When we determine our course of action, we will let everyone know,” Sulaiman said exclusively to BoxingScene.com.