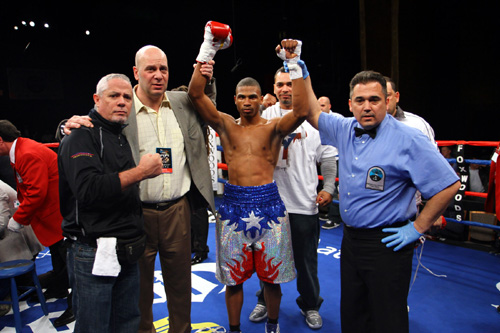 Promoter Gary Shaw has advised ThaBoxingVoice.com that his October 27th card is a Triple-header and not a double header as reported by other media outlets. It is scheduled at the Turning Stone Casino in Verona, New York. This is the very same venue where Shaw, along with Banner Promotions, co-promoted the HBO Boxing After Dark series which featured a middleweight championship bout between Gennady Golovkin and Grzegorz Proksa for the WBA Middleweight Title. The October 27 event will be the second show casing of HBO’s version of a ShoBox style series. “These are not smaller fighters, these guys are 15-0 and they’re beyond ShoBox type of fighters,” Shaw said.

In the main event, welterweight Thomas Dulorme (16-0, 12KOs) will face veteran Carlos Abregu (33-1, 27KOs). The one time we saw Abregu he gave a spirited effort against pound for pound #8 Timothy Bradley. This would be Timothy Bradley’s debut at welterweight, it went well and he was able to easily defeat Abregu over 12 rounds, taking a unanimous decision on scores of 118-110, 117-111 and 116-112. That would be Abregu’s only loss and the fact that he’s a true welterweight makes him the perfect barometer for Dulorme.

“Abregu only lost to Tim Bradley, so Abregu is a major step up for Dulorme,” explained Shaw. On October 27th we will also be treated to a matchup between San Francisco’s Karim Mayfield and junior welterweight Mauricio Herrera. Mauricio Herrera injured his back when this fight was originally slated to be on the Aug. 17th main event of ESPN2’s Friday Night Fights. Now this fight adds value to exactly what HBO is trying to do with this new series in which fighters that wouldn’t normally appear on HBO will get the chance to do just that. Mauricio Herrera gave as well as he received in his last fight against Mike Alvarado this past April.

While Mayfield has been waiting for this day to come, he’s been making his own efforts to get on the big networks by putting together exciting victories, 3 out of his last five by TKO and 10 of his 16 wins coming by way of knockout. We all know fans love knockouts. 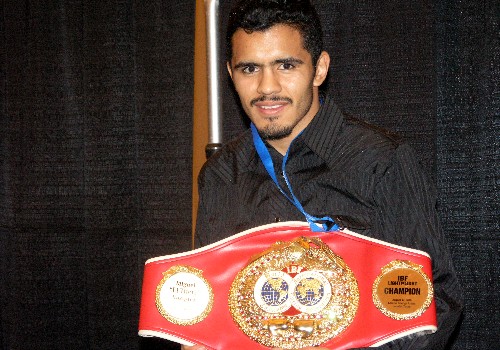 The last fight on this already stacked card will be something special, promoter Gary Shaw told Thaboxingvoice.com that Marvin Quintero (25-3, 21KOs) is fighting IBF lightweight champion Miguel Vazquez (31-3, 13KOs). Miguel “Titere” Vazquez had a tough upbringing, brought up in Guadalajara, Mexico, he turned to boxing because it was in his blood his father was a prize fighter. Vazquez is easily the lightweight divisions best kept secret, with wins over Breidis Prescott, Ji Hoon Kim, and Lenny Zappavigna, he’s even had the opportunity to gain in the ring experience with current WBO Champion Timothy Bradley, losing a unanimous decision to the now champion.

“It’s a great opportunity for me; lots of exposure, people who haven’t seen me will see me. I’m going to show the people Miguel Vazquez is one of the brightest stars in Boxing,” said Vazquez.

A win here on HBO can put him in the running for the Demarco-Broner winner; without a doubt HBO is invested in both Demarco and Broner and after their clash they’ll need an opponent. “It’s going to be a tremendous card, it’s a triple header, it’s a great card Turning Stone in New York so look forward to great fights,” said Gary Shaw.