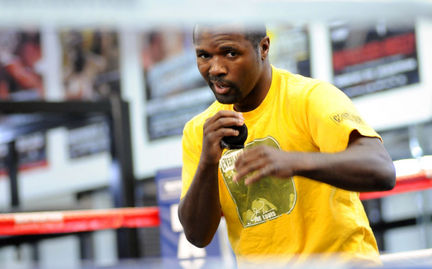 The official weigh-in will take place this Friday, January 11 at 1:00 p.m. ET at theBB&T Center Food Court located at Section 130 (One Panther Parkway Sunrise, FL 33323) and is open to the public.  For Friday’s weigh-in, please enter through Gate 5, park in Lot B16 and enter the building through the North Patio.

Tickets priced at $195 (VIP Tables), $95, $45 and $20,not including applicable service charges and taxes, are on sale and available for purchase at all Ticketmaster outlets, by calling (800) 745-3000, online at www.ticketmaster.com or at the BB&T Center box office.  Fight fans can also purchase annual subscriptions for all four events in the series inclusive of VIP seating and boxing legend meet and greets by calling 954-835-CLUB.  In addition to the Jan. 12 event, Golden Boy and the BB&T Center will host additional live boxing events on June 1, 2013, Oct. 12, 2013 and Jan. 14, 2014.

Fighting out of Washington, DC, 25-year-old Thomas Williams (11-0, 8 KO’s) has emerged over the last two years as one of the top prospects in the light heavyweight division.  Currently riding a four-fight knockout streak, Williams followed up three consecutive first round knockouts with a fifth round finish over Ricardo Campillo on December 8.  This Saturday, he’ll look to get 2013 off to a knockout start against fellow prospect Smith.

A professional since 2005, Williamson, Kentucky’s Jason Smith (8-1, 6 KO’s) has the power and desire to make the best of the biggest opportunity of his career this Saturday.  A knockout artist with dynamite in his gloves, Smith’s current five fight winning streak includes four consecutive knockouts, three in two rounds or less.

At the 2012 London Olympics, Cleveland’s Terrell Gausha (1-0, 1 KO) went 1-1 as a member of Team USA, finishing off his amateur career in style.  Last November, the 25-year-old made his professional debut with an impressive second round knockout over Dustin Caplinger and he looks to go for two straight this Saturday against St. Joseph, Missouri’s Kenneth Schmitz (2-4, 1 KO).

Now making his home in Miami, 2004 Olympic Silver Medalist for Cuba Yudel Johnson (12-1, 8 KO’s) plans on bouncing back from the first professional loss of his career to Willie Nelson last May when he tackles an opponent to be named in an eight-round junior middleweight fight.

Plus, Hollywood, Florida super middleweight Tracy Rollins (2-0, 1 KO) will take on an opponent to be determined in a four-round fight and Chapel Hill, North Carolina welterweight Willie Jones will see action in a four-round bout against an opponent to be named.  In the evening’s opening fight, also scheduled for four rounds, Fort Lauderdale’s own Larry Yanez (3-3-1) faces Miami’s John Wampash (1-7-1, 1 KO) in the lightweight division.