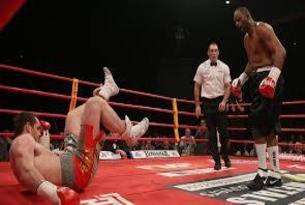 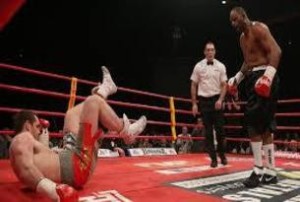 Three years ago British heavyweight David Price was the reincarnation of Goliath. He was ploughing his way through the usual array of local veterans like Matt Skelton, Sam Sexton and Audley Harrison in brutal fashion, but was found wanting in his first real advancement into championship territory.

American Tony Thompson looked to be an out-of-shape forty-year-old with a recognisable name when he was signed to be Price’s sixteenth opponent. The fact that he had only lost twice to Wladimir Klitschko since hitting his stride in 39 professional fights was a fact regrettably overlooked by Price’s handlers.

In February 2013, they met and the southpaw veteran overcame a routine early barrage from Price and began to slip and slide his way inside the Liverpudlian’s long reach to land a cuffing right hook to the ear in the second round. Price fell like his strings had been cut and looked like the town drunk as he got to his feet. The referee rightly waved the bout off to the stunned silence of the home crowd.

Whether it was an advisable strategy or not, Price accepted an immediate rematch back in Liverpool five months later. In hindsight, it was a move that brought undue pressure to rectify what many viewed as a fluke occurrence at the time. He even enlisted the help of the UK’s greatest ever heavyweight Lennox Lewis to prepare him for retribution.

Price looked a little bit wary from the off, pawing with the jab and looking concerned of what might come back his way. Thompson cut a confident figure and by the time the second round was underway, he was managing to land successive hooks and uppercuts on the inside that clearly made Price uncomfortable as he scrambled to hold.

A brief glimmer of joy came with a minute to go in that round as Price fired back and landed a good right hand before bundling Thompson to the mat. Cheers went up and emboldened him to drop a booming right hand on Thompson’s jaw for the first legitimate knockdown of the fight.

Thompson rose at the count of nine and looked steady for the remaining ten seconds of the session, but Price’s chest heaved up and down as he took his stool; a warning sign.

Over the next three rounds, competitive action in the same vein continued. Price landed some big shots in between Thompson’s more frequent, less powerful efforts, but he was the only one in there visibly tiring.

The fifth is where it all fell apart. With two minutes to go, Thompson landed a right uppercut followed by a left hook to initiate what would turn out to be the final flurry. He poured on the punches with both hands and forced Price into the corner where he slumped over the ring post. The ref could have stopped it there, but chose to give Price a very slow standing count, before waving it off.

It was a victory without question, but following the result Thompson received an 18-month ban from the British Boxing Board of Control for test positive for hydrochlorothiazide.

According to the Daily Mail, the same substance was found to be in his system by the Austrian Boxing Federation when he fought Kubrat Pulev a month after the second Price win, for which he was handed a 1-year suspension.

These two separate bans have not hindered Thompson from appearing elsewhere and he has continued his career, maintaining that the substance found in his system came from high blood pressure medication, and not any performance enhancing substance as was implied.

In a recent interview with World Boxing News, he said the whole affair was reported unfairly in the UK, and he felt the drugs issue was just a way to mask the demise of an over-hyped fighter, a notion supported by Price’s most recent KO loss.

“I thought it was in very bad taste and I also feel bad for David as well because they keep wanting to make excuses for why he lost to me.”

“They now see with his loss to Erkan Teper that he is just not a very good fighter and it was not because I was on drugs.”

“Of course, I would be open to a third fight with David as I see it as an easy fight for me. I have proven it twice, so it’s no problem for me to do it again.”

His ban in the UK is now over, leaving the opportunity for a third fight open. Thompson may be ready to pack his bags again, but you have to wonder whether Price would want to revisit traumatic ground.