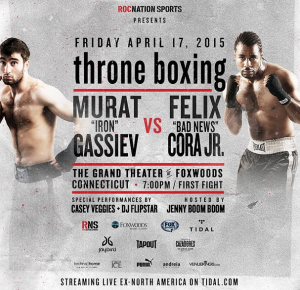 Jay-Z’s venture into boxing continued tonight as the second installment of “Throne Boxing” showcased a main event between undefeated Murat Gassiev from Russia and Felix Cora Jr, a Texas native. The fight, which was being held at the Foxwoods Resort in Mashantucket, Connecticut, was scheduled for 12 rounds in the cruiserweight division.

Gassiev started off the fight strong with a dedicated body attack. He found a way to corner his opponent and gave Cora very little room to maneuver. Cora did let his hands go, but it was difficult to establish a working offense with the body attack initiated by Gassiev.

Gassiev, who is trained by Abel Sanchez, wasn’t completely dominating the fight and Cora was certainly competitive to a degree, but Gassiev was establishing himself as the better fighter. Cora was more than okay with letting Gassiev control where the fight was fought and made no attempt at boxing or moving, and instead allowed Gassiev to keep his back against the ropes.

In the 7th round, and with a steady pressure thus far, Gassiev put Cora’s back against the ropes and went for the finish. He threw several hard shots and mixed the attack well, but Cora withstood the punishment long enough to circle out once Gassiev tired himself out. Cora then put Gassiev’s back against the ropes and it was a fairly impressive comeback, even if it didn’t last long.

Gassiev regained control, but it was clear that he had gassed himself out a bit.

Gassiev kept the pressure on and continued to mix up his attack. The heavy punches proved to be too much for his opponent and Gassiev was able to close the show in round 9 after the continued assault began to get dangerous.

In the evening’s co-feature, “The New” Ray Robinson won a unanimous decision over Sherzodbek Alimjanov through 10 rounds. Robinson just jabbed his opponent to death and showcased his ability to work while moving.

Robinson scored a knockdown in round 4, but his game plan was clearly to showcase his boxing skills and wasn’t designed to close the show, although he did come pretty close.