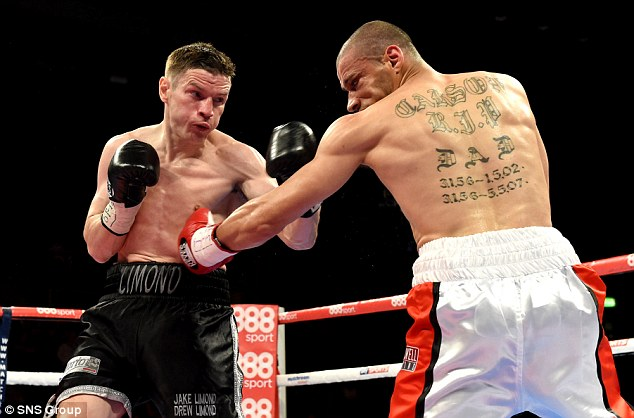 The story of Curtis woodhouse is one only the most ice hearted among you would fail to be warmed through from. His journey has been repeated many times over, so here we go again.

Successful Football (Soccer) player who fell a little out of love with playing the sport, (his own words). Leaving the ball on the pitch he set out for new pastures. Getting hit in a boxing ring, you have to appreciate the bravery.

Not the most gifted fighter, he scraped through his career with losses; wins; brutal knockouts and moments of outstanding glory, ok, maybe just the one moment really.

He achieved his goal in the end. To hold the British Light welter weight belt above his head. Mission accomplished, goal achieved (no pun) Walk off into the sunset, your only companions, the British belt and a wobbling haze of heat settled in front of the camera. Great story; nice ending. Job done.

Except he came back, and lost against Willie Limond on Friday night.

He started well, the Jab looking sharp, mixing in some body work too. Limond took it all; patient, looking to see what was being offered. When he felt comfortable with his opponent, Limond responded with a classy looking combination that Boxed Curtis onto the back foot. Smudging what was otherwise a pretty clean round for the Yorkshire man.

It seemed Limond was the one landing the better responses in the rounds. As early as the 2nd theres a clear and present class gap between the skills of both fighters, as should have been expected. It wasn’t from many though, including myself, I thought Curtis would have enough fire left within to take this fight. One i suspected would have been his last, regardless of the outcome.

A polite round of testing each others jabs out in the 3rd, despite a lack of building shattering explosions, the crisp work and cool early chess play between both is really fun to watch. It’s all calm, it’s all sensible. Until Curtis presses the gas just a little and pays for it by getting touched with a left uppercut that lands so quickly it almost looks like it never made clean contact. Woodhouse is flat on his back, a position I’m 100% certain he wasn’t expecting himself to ever be in at all in this fight. He makes the count.

Both have a great 4th round, Curtis with his distinct left hands to the body, Limond with the overall better technique and variations. The 5th tells a similar story except Woodhouse is taking a few more, again, that gap in class I mentioned. There is a noticeable drive from Curtis though, making the fight fun, Curtis is a definite participant in making this a pretty fan friendly affair, all credit to him.

In the 6th Curtis is backing Limond up with volume, not everything strictly clean but a clear effort on the former Footballers part. He’s taking a few shots for his bravery, as is the way with Woodhouse. Limond containing the amped pressure fairly well with simply better Boxing skills, nothing more. The 7th and 8th rounds don’t deviate too much from the pattern of proceedings.

In the 9th we are treated again by these fighters, both appreciating the following rounds will be the deciders on the scorecards. This recognition apparent in their increased efforts and work rates. Curtis is stopped in his tracks with an intrusive body probe from Limond, who’s showing the overall classier work again as he does in the 10th, except with even less back from Woodhouse.

In the 11th round Woodhouse puts together a nice series of punches, even pouring enough on to make Limond hold for an interesting moment. Curtis aware of his standing on the judges cards, has approached the remaining rounds with a clear front foot in the fight; the overall consensus, a fight he is losing.

Curtis being Curtis tries to make the fight, and gets dropped again for dong so. Right uppercut from Limond this time, another flash Knockdown . Woodhouse’s knee touches the canvas as quickly as it leaves it, he barely goes down, but it’s rightly counted.

Curtis catches Limond with an admirable right hand in the last round, Limond holds, and from there on in, adopts an alert awareness, prefering a respectful distance from the maurading Woodhouse, looking for any shot he can find, a brave round. A round that could, and probably should be Woodhouse’s last in a ring.

116-110 on my card to Limond. The judges awarded Limond a SD. No where anywhere on the planet could the greatest magician conjure up a draw from that fight, as one judge who was too busy texting on his mobile clearly did. Woodhouse himself agreeing in a post fight IFL TV interview the split was a little off kilter.

Curtis responded when asked if it was over for him, and said “this could be it”. I think it should be.

Thanks for the fights Curtis mate.