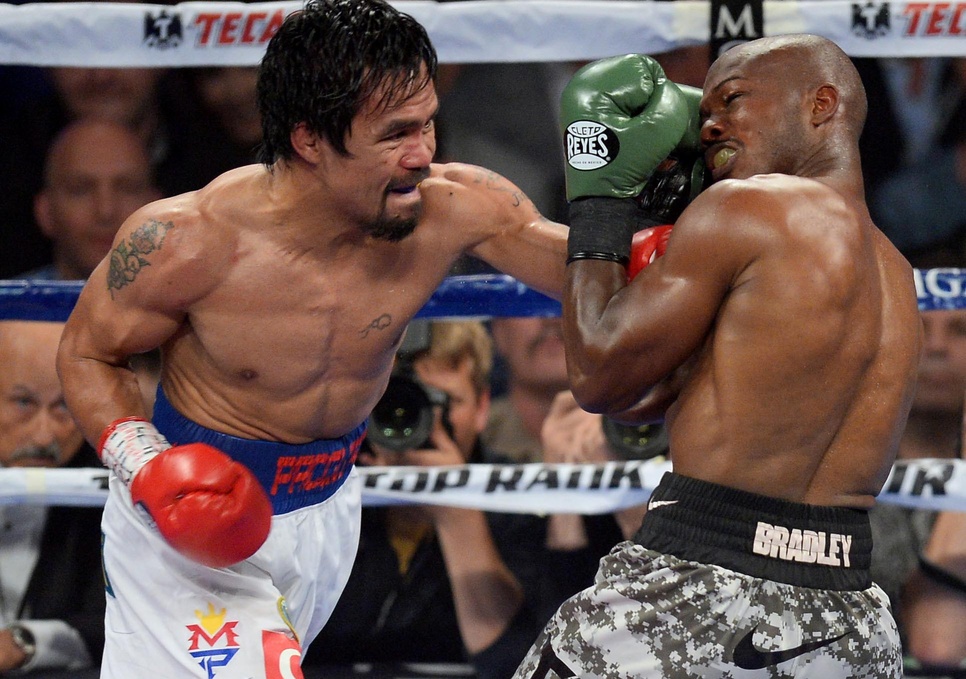 Revisionist History: Manny Pacquiao loses to Tim Bradley on June 9th, 2012 in a decision where the vast majority scored the fight for Pacquiao. As if the decision wasn’t bad enough, the conspiracy theorist started claiming fix fights, corrupt judges, and boxing is dead. Then someone tells us to watch the fight again with the sound off and for some strange reason we all did.

Then it began, people really started to think Tim Bradley fought a close fight against Pacquiao. Then the videos continued, highlighting Jim Lampley’s Pacquiao bias calling shots that didn’t seem to land for Pacquiao. That alone kept the hysteria rolling, and we went and re-watched the fight again. The next thing that was brought to our attention was the replays of HBO only showing the work that Manny Pacquiao did and nothing of Tim Bradley. The outcome? A number of people now claiming Tim Bradley actually winning the first fight! What?

I’ll admit, I was pretty pissed that Manny Pacquiao decided to disappear that night after we were waiting for game 7 of the Celtics and Heat to finish. Living on the east coast, it took me into the wee hours of the night. But as sleepy and tired as I was, I know who won the 1st fight between Manny Pacquiao and Tim Bradley. I had Pacquiao winning 116-112 and winning pretty easy. Even if Bradley was making Pacquiao miss and landing a pawing jab with a right hand here and there, Pacquiao was still landing the cleaner more effective shots even if he would take half a round off.

Pacquiao never seemed like he kicked out to 5th gear at all in the fight and he won, pretty easily in my opinion.

Fast forward to this past weekend, to what was said to be a declining Pacquiao beats an ascending Bradley. While watching the fight, you could tell, this wasn’t the same Manny Pacquiao. Whether it was a more careful approach or a loss in aggression, Pacquiao wasn’t what he was when he was steamrolling the competition. Still, that Pacquiao had enough in him to beat what many considered to be a top 3 pound for pound fighter, if not top 5.

I thought Pacquiao could have made it easier on himself if he would have amounted a simple body attack or even thrown an uppercut while Bradley was ducking and eluding his straight left hands.

Tim Bradley definitely had a different game plan going into this fight. Seemingly more confident he went on the attack and hurt Pacquiao early on and maybe that was his downfall. The first 6 rounds were fight of the year material, one where you could say Tim Bradley had the edge at the halfway point.

As aggressive as Bradley was in the 1st 6 rounds, it was not to be in the final 6 rounds. Pacquiao would feint, Bradley would react and Pacquiao would land after Bradley’s reaction. In the end, it was a decision victory for Pacquiao which I scored 115-113.

I scored the first fight for Pacquiao 116-112 as mentioned before and though that victory was more definitive. Then I believed the hysteria and fed into the videos and re-watched the fight. Because I was led to believe the bias in HBO’s commentary had singled Bradley’s work out in the 1st fight, I found myself giving Bradley 1 more round and scored it 115-113. I probably shouldn’t have done that but I did.

Manny’s 1st win was more decisive. The only reason we re-watched was because of the controversy. Truth is, if there was a clear decision victory in the 1st bout, there probably wouldn’t have been any revision, no rematch, and who knows where we are?

With that being said, do we not re-watch the rematch with the sound off, lights off, and in the living room with our candles lit? Of course not. The right guy won this past weekend and should have won the 1st time. But just imagine where we would be if Pacquiao got the decision in the first fight and we didn’t re-watch the fights with a pre-determined feeling that Bradley didn’t get a fair shake from the HBO side. Just Imagine.