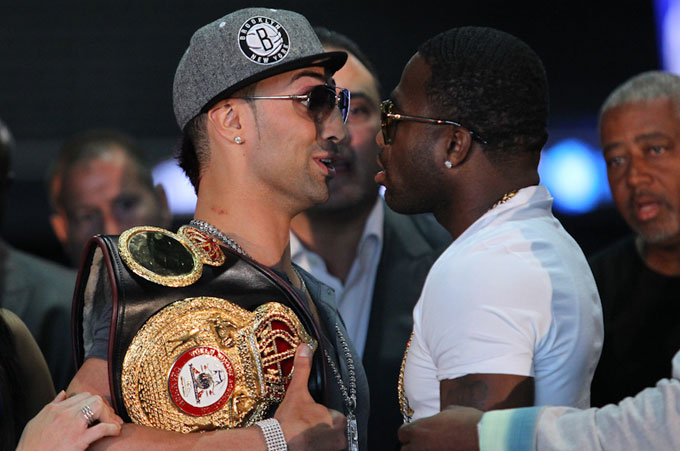 Tomorrow, the center stage of the boxing world will be centered at the Barclays Center, in Brooklyn, NY, as Showtime will be presenting a good card of action led by a championship bout between Adrien “The Problem” Broner and Paulie “The Magic Man” Malignaggi for Malignaggi’s WBA Welterweight title. Also on the undercard will be a rematch from last year as Seth “Mayhem” Mitchell will try to recover from getting stopped in round 2, last November, as he faces Jonathan Banks.

Adrien Broner is the type of fighter that fans have no middle ground with. You either are going to love him or hate him. The still young, flashy, 23 year old from Cincinnati is always the talk of every one of his bouts. So far he has backed up his talk, which is hard to do with how much he talks, with a 26-0 record with 22 KOs. He is moving up 2 divisions from his last fight at 135 lb lightweight class, however, this is not Broner’s 1st fight at Welterweight. He faced Henry White Jr. at welterweight in 2009 in a scheduled 6 round bout, in which Broner KO’d him in the 3rd. Also Broner has in the past been criticized for missing weight more than once, so this would probably fit him better anyway.

Paulie Malignaggi (32-4 with 7 KOs) is not exactly a shy angel himself. The self-proclaimed Twitter King has made a name for himself inside and outside the ring. Not only has he had a very good boxing career for himself, but he is also known as 1 of the best boxing analyst outside the ring for Showtime Boxing. Not to mention that highly watched, previously mentioned, Twitter account that he is very active on, talking with fans as well as other boxers. Malignaggi got the title by going over to the Ukraine and beating the then 32-0 champion, Vyacheslav Senchenko, in April of last year. Since then, Malignaggi has only had 1 bout and it was to open the Barclays, as he won a controversial split decision vs. Pablo Caesar Cano, a bout that I scored 115-112 for Cano.

If you’ve paid any attention to these 2 on Twitter or in any of their interviews, you already know that they both love to talk, crack jokes, and send a few insults along the way. Whether is Malignaggi calling Broner “Adriana” or whether is Broner having some time of “relationship” with Malignaggi’s girlfriend Jessica Corazon, these 2 can entertain you inside and outside the ring at times. In terms of the boxing part of this, Paulie is more experienced and the more crafty fighter. Broner has a lot more power and a 1 inch reach advantage. Paulie should want to come out early and win like 3 of the 1st 4 rounds if possible. Broner usually waits to see if his opponent can hurt him and then reacts from round 4-5 on. I think that when Broner realizes that Paulie probably can’t hurt him badly, he will attack and finish him in round 7 or 8. Then we’ll get to see after if this was actually personal or if it was all a show to sell tickets, like I expect.

In the other fight I mentioned earlier, we get to see a fight that shouldn’t last too long as the 25-1-1, with 19 KOs, Seth Mitchell, squares off against the 29-1-1, with 19 KOs, Johnathan Banks. Last November, Banks shocked Boardwalk Hall as he knocked Mitchell down twice and stopped him to get the TKO win. Mitchell, who likes to brawl and depends on his chin just standing up, hopes to test his own chin again as he tries to get back on track to being a riser in the heavyweight division. Last fight Mitchell got caught and never recovered, it may happen again, but that shot was perfect last time by Banks, I am skeptical as to whether he can do it again. I’m going to go with Mitchell by 4th round stoppage. Hopefully between this fight and the main event, we get 2 exciting fights taking place in The Barclays Center, enjoy the fights.