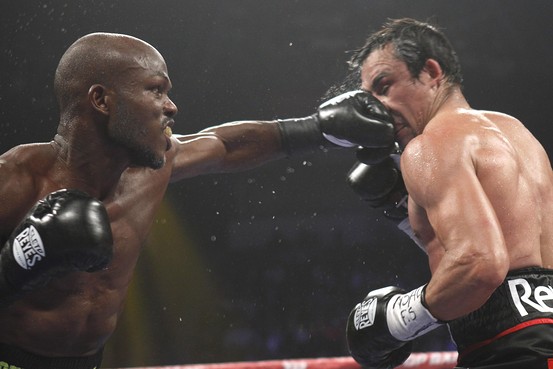 In the October 12th HBO pay-per-view main event, Timothy Bradley (31-0, 12 knockouts) took on Juan Manuel Marquez (55-7-1, 40 knockouts) in a pivotal and compelling welterweight match-up. Pitting the #2 and #3 welterweights against each other, Bradley was set to defend his titles against the Mexican veteran as well as finally prove to the fans that his recognition as one of the best was no mistake.

At the start of the fight and in the early rounds that followed, it was no surprise to see that Marquez was the aggressor throughout. Marquez came forward full of confident and began unleashing some of his trademark hooks in an effort to hurt Bradley early, and goad him into the type of fight that would just guarantee a violent victory for the crafty Mexican. With Bradley taking a much more calculated approach, one couldn’t help but wonder when and if he will grow frustrated enough with Marquez that he’ll decide to trade blow-for-blow with him.

Much to everyone’s surprise, this never happened (at least early in the fight). Instead, Bradley frustrated Marquez with his blazing fast hand speed and a slick shoulder-roll that would make even Adrien Broner blush. This tactic left Marquez frustrated and open for punches as Bradley would quickly capitalize and steal rounds. Even in some of the wild exchanges that close these rounds, Bradley would surprise many in not only the fact that he can take some of Marquez’ best shots, but that he could hurt the future Hall-of-Famer as well.

As rounds continued to pass, it was clear that Bradley’s gameplan was working. By this point in the fight he also began utilizing a stiff double jab that kept the plodding Marquez at bay. As Marquez’ frustration continued to grow so did his desperation. With Marquez’ growing impatience, he was determined to knock Bradley out similar to how he starched Manny Pacquiao. This led to Marquez adopting a tactic of throwing single power shots that Bradley would easily avoid, and capitalize with his own offense. It was a tactic that not only frustrated Marquez’ countless fans, but further solidified the fact that the fight was slipping away from his grasp.

With the final rounds approaching, the sense of urgency was apparent in Marquez’ corner. Finally acknowledging the fact that single power punches just weren’t going to cut it, Marquez began resorting to his barrage-type of attack that had earned him so much acclaim as of late. Although Bradley was still managing to keep his composure and fundamental technique against Marquez, there’s no denying the fact that Marquez was not only winning rounds, but close to winning the fight with the way some of these punches were landing.

Things looked really good for Marquez in the tenth round as he finally managed to force Bradley into a sloppy exchange that saw both fighters throwing bombs and both fighters badly wobbled.Rather than capitalizing, Marquez was left to recover and regain his base while Bradley recovered quickly enough to continue out-boxing the Mexican. With a close tenth round, Marquez would finally showcase enough offense to win the championship rounds of the bout as Bradley seemed to take his foot off the gas.

After twelve rounds, there was no arguing that Timothy Bradley had thoroughly out-boxed and out-classed Marquez. To put it simply, Marquez finally managed to look old in that ring. Even though the verdict seemed clear to every watching at home and at ring-side, the judges (once again) seem to have watched a completely different fight. The split decision was read as (115-113), (113-115), and (116-112) for Bradley. The fact that the fight was considered a split-decision has led to another public outcry against the judges of these big fights, but for now all one can focus on is the fact that Bradley is the real deal and one of the best boxers of this era.