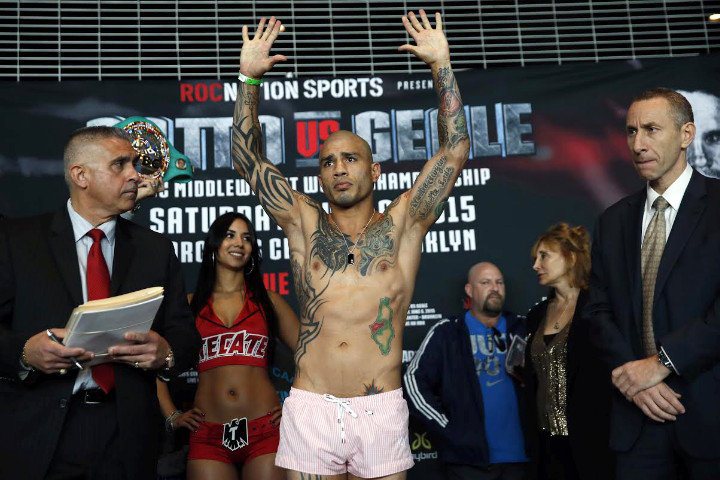 To catch-weight or not, that is the question. Using a Shakespearian tone, it seems that much of the debate in boxing lately has been about the use of catch-weights. Catch-weights have been used throughout the history of the sport. It was usually deemed as a meeting point between a smaller fighter moving up in weight to fight a bigger fighter. In this modern era of boxing, it’s more about using leverage.

Let’s take for instance Manny Pacquiao. He has been a proponent of such a catch-weight in the past. When he fought Oscar De La Hoya in 2008, he was making the move from 135 to 147. At that point, De La Hoya had long left the welterweight division but for the two to meet, it would be at 147. De La Hoya was drained, and Pacquiao destroyed him. Pacquiao’s next fight at welterweight would be against Miguel Cotto at a catch-weight of 145. Pacquiao was the A-side and even though they were fighting for Cotto’s title at 147, Cotto had to submit to the demands. Pacquiao also won a vacant title at 154 using a catch-weight of 150 against Antonio Margarito.

Fast forward to recent times and you find that the same Miguel Cotto, who was the champion in 2009 and had to give in to demands, is now in the position that Pacquiao was in, the catch-weight king of the middleweight division.

Cotto isn’t a middleweight and quite frankly might not have been a sizeable jr.middleweight, so he is holding the lineal title hostage. Maybe so but in 2009, he dealt with being on that end of being the B-side and for those who fight him they will have to deal with a catch-weight unless they are bigger draws than him. At the moment, only Mayweather, Pacquiao, and maybe Canelo are bigger draws in the sport than he is.

Canelo Alvarez has used catch-weights in the past; His past three fights have been at 155. He won his first world title at a catch-weight of 150, even if he did miss weight against Matthew Hatton. Canelo’s catch-weights are less vigilante because titles aren’t on the line.

Then there’s the curious case of a Danny Garcia, who was the champion at 140, yet his last two fights were above 140 even though his fight with Lamont Peterson should have been a unification bout. Garcia will not test the waters at 147.

Recently we had a bout between Adrien Broner and Shawn Porter contested at 144 when both men had fought at 147. Porter’s dad said that if there was no catch-weight, Broner wasn’t taking the fight and as the A-side, Broner took advantage of it.

In a potential bout between Vasyl Lomachenko and Guillermo Rigondeaux, Rigondeaux side had initially wanted a catch weight of 124 with a rehydration clause of 134. Lomachenko’s side declined.

Rigondeaux side then said they would do 126, but needed the 134 rehydration clause. Lomachenko’s side declined again. Lomachenko isn’t what you would call a household name, but in this instance he has been on HBO more, while Rigondeaux has been relegated to fighting in Japan on U.S. television, so in that instance Lomachenko is the A-side and using his leverage.

Then there’s Julio Cesar Chavez Jr. who is the A-side against many and almost seemingly decides the weight of the fight at the final weigh-in.

Gennady Golovkin is a man looking for a major fight. For years, his team has said that they are willing to go up to 168 for big fights or down to 154. Golovkin is the best middleweight to many and wants a crack at the winner of Cotto and Canelo. However, his team has made statements that they wouldn’t fight Canelo at 154, only Mayweather.

Golovkin’ team had also recently come out this week and stated vehemently that they would only entertain a fight with Andre Ward if it were a catch-weight of 164. Here’s where there’s a problem.

A lot of pundits and pugilists have criticized Cotto for stipulating catch-weights for his lineal world title at 160. Andre Ward is still the lineal 168 lb. champion. So in an instance that there’s a bout between Golovkin and Ward, is the lineal title on the line? If so, then those that are up in arms at Cotto for stipulating such a catch-weight for a lineal title should be up in arms at Golovkin in the same manner.

Golovkin is the A-side versus Ward, and the catch-weight is nothing more than using his leverage, which is fine by me. But in the same instance, you can’t fault Cotto or anyone else for doing the same, especially when Golovkin’s side has said they would move up to 168 for Carl Froch or Julio Cesar Chavez, Jr.

Like my fellows at @3BMBoxing have said, “Everyone hates catch-weights until your favorite fighter uses them.” Catch-weights now are used as leverage and to gain an advantage, no matter how you want to slice it. If you’re A-side in the equation you can demand what you want and the B-side, it up to you whether you accept or not. So to catch weight or not? You make the call boxing fans.