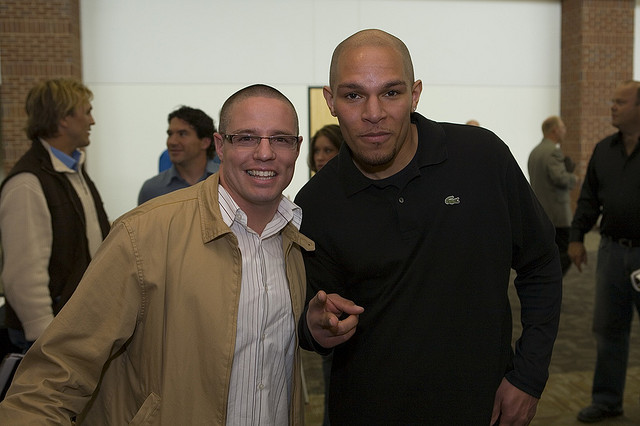 Excluding Floyd Mayweather and Manny Pacquiao the only thing you hear from the mainstream sports media is that boxing is dead. The boxing media tends to focus its coverage on the west coast where the best sparring along with some of the biggest names and events taking place in Nevada and California. The east coast has made a bit of a comeback and Texas has a very strong fan base but you rarely hear or see a major event or much news coming from the Midwest. That’s something Tony Grygelko, who is the President/C.E.O. of the premier upper Midwest boxing promotional company Seconds Out Promotions aims to change.

Boxing on the highest levels of basic and premium cable channels has seen an uptick in ratings in the last 2 years. Showtime alone has a huge 50% gain since 2012. Both CBS and NBC late last year brought boxing back in the afternoon slot just as boxing fans in their 30’s and up remember what it was like on ABC Wide World of Sports. The major promoters have reduced the average ticket prices to most of the major shows and the fans have responded. But on the amateur, local, and club level boxing is dying or dead in many areas across the country.

Even on Espn2 Friday Night Fights and Shobox you see empty rooms in casinos. Another prime example is the HBO brawl between well known Timothy Bradley and Ruslan Provondnikov, one of the best fights of the year so far taking place in front of an announced but heavily comped 3,050 at a great southern California venue.

Usually when you think of Minnesota, you think of cold weather with the biggest sports being hockey and wrestling. Gone are the long ago days in the late 1800’s and early 1900’s when St Paul, with its strong Irish roots was a Mecca for boxing. In fact boxing was fairly popular in Minnesota up until the 1960’s and 70’s. The state attendance record of 13,789 was set by the Scott LeDoux vs. Duane Bobick fight in 1974. LeDoux faced the best of the best at the heavyweight division when he took the likes of Muhammad Ali, George Foreman, Leon Spinks, and Ken Norton. The state boxing commissions was abolished in 2001 but was reinstated in 2006 with the now late Scott LeDoux at the forefront.

When you think of a current Minnesota boxer names such as Jason Litzua, Matt Vanda, and most recently on the national scene, Caleb Truax comes to mind. Quite often fighters from Minnesota come in to a fight on television as an opponent and Teddy Atlas or another broadcaster will mention the words “padded record” before the fight begins. The most successful fighter in the last 5 years as far as exposure and opportunity has been Jason Litzua, who has a fan friendly style, an upset win over Celestion Cabellero, and has faced the likes of Adrian Broner and Robert Guerrero. At the present time the biggest and best fighter is “Golden” Caleb Truax, who recently scored a 6th round KO over fellow Midwesterner Don” The Bomb” George in a co-feature fight on Espn2 Friday Night Fights.

Tony Grygelko founded Seconds Out Promotions in July 2005 and his first contracted fighter was Truax. Tony, who has a wrestling and boxing background, had an extensive amateur career but saw his pro career shortened due to an elbow injury that happened from what he describes as a “freak accident while throwing a left hook”.  The injury required 15 screws and 2 plates in his elbow making it very difficult to carry on as a pro fighter with a come forward style.

He had developed a solid fan base and decided to stay around the sport hoping to improve the standards of local events and overall promoter professionalism’s something that is lacking in the game not just locally but everywhere. He also wanted to bring a boxer’s point of view when it came to the business with more than just profit being the main concern.

Grygelko credits trainer Ron Lyke with playing a major role in rebuilding the boxing market in Minnesota. With the help of Lyke’s knowledge he took the local scene by storm right from start. In his 2nd show ever he managed to break a state record with the highest grossing event in Minnesota history in his 2006 event that featured Matt Vanda vs. Anthony Bosante in the main event drawing over 11,000 in attendance.

Since then Seconds Out Promotions has become one of the fastest-rising fight promotional companies in the world staging events not just in Minnesota but Michigan, Iowa, Kansas, and Nevada. Nevada, New York, Texas, and California are the main hubs for local and national shows. Seconds Out Promotions has become very competitive even with the major markets, Tony stated, “I’ll put my attendance numbers up against many other top promoter’s.” His club shows can bring upwards of 3000-4000 and his current local star Caleb Truax, who made his pro debut in 2007 regularly draws anywhere from 3000 to 6000.

Other promoters have praised him asking him what his recipe is, his key ingredients our marketing, matchmaking, and consistency. Tony has tried to stay away from top heavy cards stating “promoters have one good show or fight than try to fool the fans to come back”, he continues “have a great show so there pounding on your door for more. Fighters know if there fighting on my card there coming to fight.”

In his last show on June 21st he got a great responds from not only the fans but the network as well. Espn2 Friday Night Fights were in town at the Minneapolis Convention Center and they stated, “How it was incredibly refreshing to see a real event from top to bottom.” Matchmaking is a key at any level of event something Tony feels is one of his strengths. “It’s important to match these guys properly; it’s not that these guys (promoters) won’t put up the money, sometimes they just don’t know what they are doing.”

He said in our interview on Rope A Dope Radio that he’s had talks to bring Espn2 Friday Night Fights back in 2014 and mentioned conversations with other networks for a show this fall that could include Caleb Truax, who sees a big fight on the horizon but is not in a rush to force a title shot. His next fight may come in early fall and Tony named current middleweight titleholders Peter Quillin and Daniel Geale, along with contender Danny Jacobs and I would throw in Sergio Mora as well as possible future targets for Truax.

The local boxing scene has made great strides for attendance in Minnesota and 2013 has been a great year for Seconds Out Promotions. The future is only going to get brighter for the company and its top fighter Caleb Truax. Both have giving local fans something to cheer and be proud about. The next event is this Friday, June 26th with the main even pitting all action brawler Phill Williams against veteran fighter Derrick Findley at Hyatt Regency in Minneapolis. Fights start at 7pm tickets are 35 dollars for general admission, 75 VIP Table, 85 and 100 for ringside. Tickets can be purchased at http://www.soboxing.com/tickets.html

Listen to the full interview with Tony Grygelko At  http://www.blogtalkradio.com/ropeadoperadio/2013/07/04/tony-grygelko-and-prospect-donovan-estrella-gggmacklin-recap