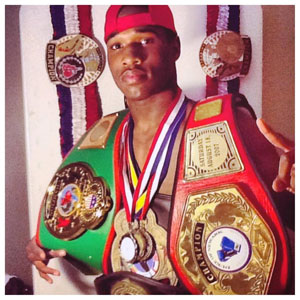 Stephen “BreadMan” Edwards is really making a name for himself in boxing and his stable of fighters is growing, both in numbers and quality. Many boxing insiders have been familiar with “BreadMan” for years, and you might know him as Julian “J Rock” Williams’ trainer, but he is also the trainer of Kyrone Davis, an undefeated middleweight prospect from Delaware.

Edwards is very high on Davis, and he’s not the only one, which is why he gave the young fighter nicknamed “Shut It Down” the ultimate compliment by comparing him to one of boxing’s best fighters over the past 30 years in an interview with Thaboxingvoice’s Nestor Gibbs in an interview published on TBV’s YouTube channel.

“He’s 8-0 right now. He has lightning fast hands, very strong. He reminds me of a middleweight version of Meldrick Taylor. Some people tell me I shouldn’t say that, but that’s what I see. He and Julian have wonderful sparring sessions. If I ever taped them and put them away I probably could get rich off of them. He’s an excellent fighter. He’s very gutsy, he’ll spar anybody in the area.”

There are some parallels that exist between Davis and Williams, but not in terms of style. Edwards says that Davis is on a road that is similar to Williams’.

“I expect [Kyrone] to be in the same position that Julian is in now in about 2 or 3 years. He’ll be 21 [years old] this year and he’s 8-0, so we’re not rushing things, but I don’t think there is a prospect in the country that’s better than him with under 10 fights. He’s a very supreme talent.”

Edwards is a very intelligent trainer, but he’s what makes him so valuable to have in a young fighter’s corner is the vast knowledge he has of the boxing game as a whole. Edwards says that for Davis, it isn’t about getting on TV but more about staying on TV and he doesn’t want him to fight a televised fight until he’s at least 10-0.

Besides which, Edwards knows that a fighter usually has to have an 8 round fighter under their belt as a prerequisite before fighting in their first televised fight. Davis has his first scheduled 8 rounder in September, although there are no specifics on his opponent or specific date/location, and if he fights one more time this year he’ll be 10-0, assuming he wins both fights, of course.

Obviously, the stage is being set for Kyrone Davis to make his “PBC” debut early 2016.