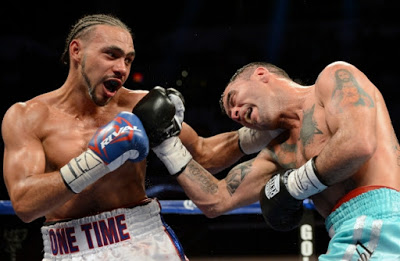 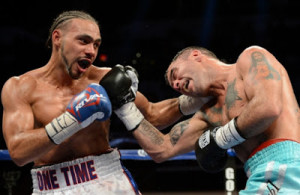 Today Thaboxingvoice.com got a chance to speak with Dan Birmingham, trainer of welterweight sensation Keith Thurman. Thurman is rumored to fight Roberto Garcia in October. We discussed Keith Thurman’s progress, his level of opposition and a potential fight with Floyd Mayweather.

Unlike some boxing fans, Dan Birmingham isn’t frustrated at all with the progress of his fighter. ”Golden Boy and Al are doing a great job with Keith”, the trainer told us. He later added, “There is a method to the madness. You move your fighter step by step. I feel that he is being moved correctly.”

Birmingham explained why the opposition of Keith Thurman has been to his liking. ”He beat Zaveck, who was a world champion. He knocked out Diaz, who went the distance twice with Porter. He knocked out Soto Karass, who beat Berto.”

On Thurman’s next opponent, Dan Birmingham couldn’t say anything. ”It is up to Al. We are just going to lay back and wait for the business to play out.” What the trainer could tell us, is that Thurman’s next fight will likely be in October and that Thurman is going to be ready. ”He had a sore shoulder after his last fight. But nothing serious. It just needed some therapy and some rest. We will be ready!”
We asked Birmingham who he wants Keith Thurman to fight next, if it was up to him. ”We’ll fight anybody,” he made it clear. “We want Danny. We want Porter. If the Cold War ever settles down, we would love to fight Pacquiao or Bradley.” The fight Birmingham wanted the most is Floyd Mayweather. He pointed out that they wanted to fight Mayweather in May. “We were ready to go, but Floyd said that Keith was too green. It was just an excuse to not fight him.”
Birmingham even already has a prediction for if the Mayweather fight is ever going to take place. “Keith will knock him out in the eight or ninth round.”
Tweet