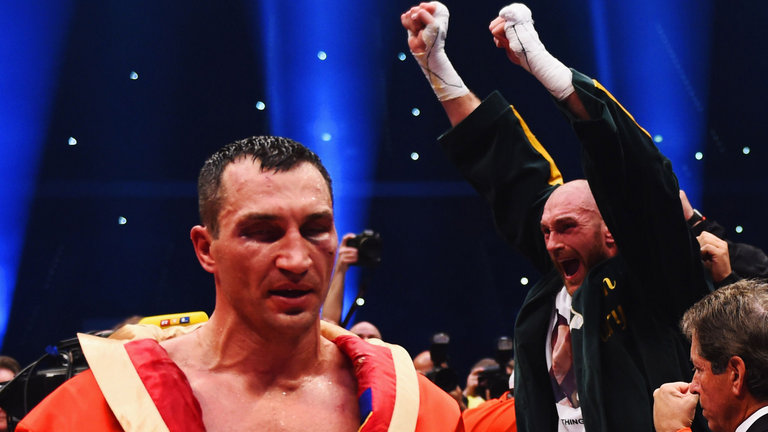 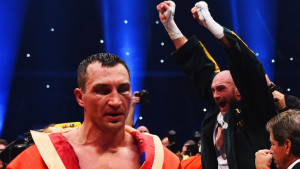 After suffering his first defeat in over a decade to Tyson Fury(25-0, 18KO) in Düsseldorf, Germany, the former heavyweight champion seeks to exercise the rematch clause that was agreed upon by both participants for the title fight.
Wladimir Klitschko confirmed to Sky Sports after the fight that there indeed was a rematch clause and then the Ukranian star admitted he was going to opt in for the chance to regain the titles he has worn for 19 straight fights.
“There will be a rematch,” he said. “It is still early and I have to process things, but there will definitely be a rematch.”
Fury, a 4 to 1 underdog, used his size to his advantage by using his jab to keep his distance from Klitschko, which is usually something Klitschko does very well to his opponents.
Klitschko looked slow throughout most of the fight and was stymied by the younger champion’s movement, which made him look every bit of the 39 years of age Klitschko brought with him to the ring.
“I was well prepared for this fight, but he was quick for his height.” explained Klitschko.
“I never believed he would do it, but he did,” Klitschko said. “I was lacking speed and he was quick. I just could not find the right distance. His reach bothered me. I tried it, but it just did not happen.”
The question now is whether it “will happen” for Klitschko in 2016 when the rematch is proposed to take place or is Fury just a bad style matchup for the soon to be 40-year-old Klitschko?
The heavyweight title match had an attendance of around 50,000 people, something Fury’s promoter, Mick Hennessy, hopes will increase after his fighters upset over the long reigning champion.
Staging the rematch at Wembley stadium in London would probably be the safest business move as it has played host to big fights before including hosting 80,000 fans for the rematch between Carl Froch and George Groves in 2014. It doesn’t hurt that it would also give Fury a huge advantage being in his own backyard, but Hennessy wouldn’t rule out the possibility of other locations to host the bout.
“We’ll be looking at venues everywhere and we’ll go where it will gross the most money,” Hennessy said. “There are massive stadiums here in England, but everyone wants the fight. I’ve had contacts from abroad, the (United Arab Emirates) as well. We are excited — both sides are to make this a super fight.”
No matter where the match ends up taking place, it is sure to be one of the biggest of the upcoming new year.
Tweet