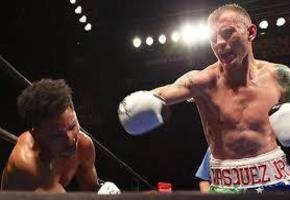 Undefeated hometown favorite Sergeant Sammy “The Who Can Mexican” Vasquez (19-0, 13 KO’s) will enter the ring in his own backyard as he battles it out with Jose “Piston” Lopez (25-3, 15 KO’s) in a 10-round welterweight match-up on the September 15 edition of FS1’s TOE-TO-TOE TUESDAYS.

The event will air live from the California University of Pennsylvania Convocation Center in California, PA. with televised coverage beginning at 9 p.m. ET/6 p.m. PT.

This fight is the second installment of Premier Boxing Champions’ FOX Sports 1 series and is set to bring another exciting world-class fight to weekday television. The co-main event on September 15 will see a 10-round light-heavyweight clash between Thomas Williams (18-1, 12 KO’s) and Humberto Savigne (12-2, 9 KO’s).

“The best feeling in boxing is fighting back in your hometown,” said Vasquez. “To be on FOX Sports 1 and to be headlining in my hometown, there isn’t anything better. I’m truly blessed to have this opportunity.”

“I’m very excited for this opportunity,” said Lopez. “I know I will be the underdog and the fans will start out rooting for Vasquez, but I will show them I have the heart of a champion. It will be a great fight for all the fans watching.”

Vasquez is coming off of a victory over Nigerian knockout artist Wale Omotoso in June in a bloody brawl that Vasquez won by unanimous decision. His toughest challenge to date, Vasquez showed that he has the skills to box on the outside and bang inside when necessary. With another victory over the tough “Piston”, he hopes to prove that he is ready for top welterweights such as Keith Thurman, Shawn Porter, and Danny Garcia.

Tickets for the live event, which is promoted by Team Vasquez Promotions, are priced at $200, $100, $60 and $30, not including applicable service charges and taxes and are on sale now. Tickets are available at www.eventbrite.com. To charge by phone call Team Vasquez at (724) 797-8694.

The 29-year-old Vasquez has fought professionally since 2012, after serving two tours of duty in Iraq as a member of the National Guard. He made it to the semifinals of the 2012 U.S. Olympic trials and won gold at the 2010 and 2011 Armed Forces Boxing Championships. The fighter out of Monessen, Penn., has not lost as a professional and looks to further improve his stock in the welterweight division.

A slugger who always competes in action-packed fights, Lopez will make his U.S. debut on September 15. Fighting out of Coahuila de Zaragoza, Mexico, the 24-year-old has racked up wins over Jorge Paez Jr., Jhonny Navarrete, Jose Emilio Perea and Mahonri Montes over his five-year career. He hopes to make a strong impression on American audiences when he tries to upset the hometown fighter Vasquez.

At 27-years-old, Williams is looking to take out another tough contender on his road to title contention. The Fort Washington, Maryland-born fighter owns victories over Enrique Ornelas, Cornelius White and Yusaf Mack throughout his career. He most recently dominated Michael Gbenga on his way to earning a unanimous decision in December 2014.

Born in Cuba but fighting now out of Miami, Savigne won a gold medal at the 1999 Pan American Games and the 2000 Cuban National Championships. He has beaten Jeff Lacy, Maxell Taylor and previously unbeaten fighters Jackson Junior and Quinton Rankin since turning pro in 2009. The 36-year-old fights for the second time in Pittsburgh on September 15.