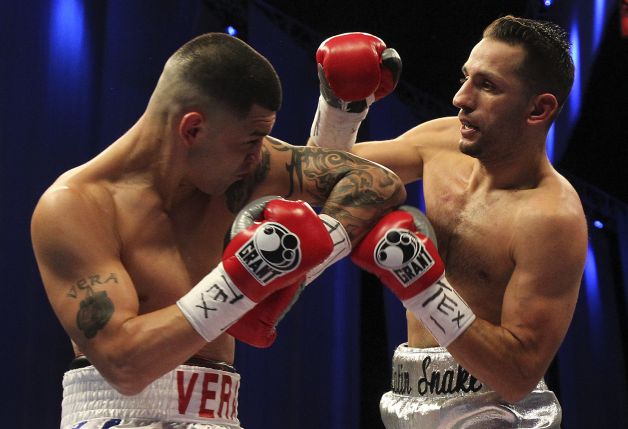 The fight started out pretty typical to a Sergio Mora outing with Mora using his defense to stay away and elude punches. Vera got off a few shots, but it was Mora’s left hand that kept Vera from being reckless.  Still, Vera did manage to effectively pressure Mora and at the end of the 1st round Vera had Mora in the corner and delivered some meaningful shots that could have stolen a close round to that point.

The fight really began to pick up in the 3rd round, where the San Antonio crowd cheered on a relentless Vera. It seemed that the action would really pick up in the last 20 seconds of the round or so. At this point Mora didn’t seem frustrated, but he was being successfully smothered by Vera.

Mora (23-3) began to find his stride late in the 3rd and well into the 4th, catching Vera with slick left hooks and uppercuts. Mora was using a combination of counter punching and elusive footwork to match Vera’s consistent pace. Both men were jawing at each other during the rounds and Mora — using his superior footwork –would escape the corner and then willingly return against the ropes to allow Vera the upper hand, each time signaling to Vera that he was willing to give Vera that luxury.

The fight was starting to live up to the first bout between the two fighters. Still, it wasn’t being consistently fought by Mora. The success he found was far and few between. It seemed like Mora couldn’t miss with his left hand, but he wasn’t throwing it nearly enough to put himself ahead on the cards. However, the fight itself was really solid and provided us with great action, much like the first bout.

Sergio Mora and Brian Vera had a tremendous fight the first time around. That fight took place on February 2011 on ESPN’s Friday Night Fights in Dallas, Texas; during Super Bowl weekend. Vera got the best of Mora in that fight winning by split-decision after 10 exciting rounds. Mora contends that he got jobbed in the fight, but Vera’s constant pressure was a bit more impressive than Mora’s slick, defensive oriented fighting style.

In the buildup to the rematch, both fighters engaged in a war of words and the fight became much more personal. Mora – who’s always been a bit theatrical – was seen talking, gesturing and taunting Vera during the fight. At the end of the first half of the fight, it seemed like the story of the first fight would play out to a tee; with Mora being a bit too in active in comparison to Vera.

Although, it must be known that Mora did let his hands go a bit more than normal in particular rounds, it’s just when you have a solid volume puncher like Vera it takes more than a round or two of excessive punching to look good.

In the 7th round, it seemed that Mora couldn’t miss with his left hand; the problem is that he wasn’t throwing it nearly enough. At the end of the 7th, Vera caught Mora with a counter-right hand – a shot that left Mora on wobbly legs – again it was the last few seconds of the round that stole the show.

It seemed as though the shots Mora landed stayed with Vera and in the 9th round Mora began to land tremendous punches. The key in that round was Mora letting both of his hands go. Once again, it was the closing moments of the round that really energized the crowd and possibly decided the round for Mora. At the bell, it was obvious that Vera felt the barrage of punches that were being rained down on him.

In the 10th, Mora came on strong and started attacking Vera. It was an unusual sight to see, Mora being the aggressor, but nevertheless Mora was effective in that role landing hard shots on Vera, who would carry those shots with him throughout the fight. Towards the end of the 10th Vera came on a bit and Mora reverted back to his slickster ways, with a bit more effectiveness this time around. At a point when it seemed that Vera was going to be put away, he returned back with a right hand that led to one of the best exchanges of the night.

Another element of the first fight that was playing out in the rematch was the fact that Vera looked good early on in the first half of the fight and Mora relished in the second half. This was a factor in their rematch. However, this time we got 2 extra rounds with the NABO middleweight title up for grabs.

In the 11th, it pretty much played out like the majority of the rounds before with Vera being the aggressor and Mora being defensive minded- keeping his right hand in his back pocket.

The 12th left little to the imagination as both fighters buckled down and tried to finish the show. It wasn’t the best round of the fight, but it wasn’t terribly easy to score either.

Thaboxingvoice.com scored the bout 116-112 for Vera.

The fight went to the scorecards and two judges scored the fight 118-110 and 117-111 for Vera, while the 3rd judge scored the bout even 114-114, giving Vera the majority decision victory.

There were elements of the rematch that mirrored the first fight, but in the end it was Vera who separated himself the most from his first performance.

I think the decision came down to appearances, and it appeared that in the rounds that could’ve been given to Mora, Vera still looked good. However, in the rounds that Vera won, Mora rarely maintained consistency and didn’t look nearly as good.

We’ll see what’s next for Vera; time will tell if he can turn this win into one last run in the middleweight division.