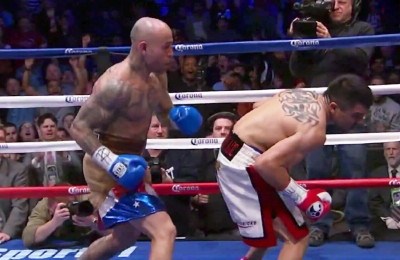 Recently former WBC Welterweight Champion Victor Ortiz (29-5-2) has made a real name for himself outside the ring appearing on ABC’s Dancing With The Stars, and he was cast in the upcoming theatrical release of Expendables 3 that should be out later sometime this year. Prior to making the jump to the mainstream, Ortiz has always entertained fans by engaging is all out war and being unpredictable in the ring.

Coming into to last Thursday’s fight against Luis Collazo (35-5), it seemed like most of the attention was directed towards Ortiz and his newly found spot light. Just as unpredictable Ortiz is; so too is boxing. With a right hook at the end of the second round Collazo managed to stun and knockdown Ortiz; ten seconds later he was out of the fight. To steal a phrase from the great Ali, on this night Collazo “Shocked the world.”

Ortiz has always been candid in his post fight interviews almost to a fault, so it should not come as a surprise that not only is Ortiz not making excuses, he is giving Collazo all the credit that he deserves. Ortiz stated, “I got caught. It ain’t like I’m fighting some bum. Collazo is a champ and I have nothing but respect. I’m not one of these guys that comes in and is looking for an easy fight. I’ve been off for a little bit due to a broken jaw and came back and I fought one of the top fighters in the world.” He went on to say, “No excuses, he beat me, he’s the champ, and I’m not.”

At the time of the knockdown Ortiz said that he was dazed, and it took him a few seconds before he realized that he was in trouble. With just a few seconds left in the round, Ortiz describes what was going through his head. “I was like 6? Oh Shit! I didn’t even know I got dropped but this happens. It’s a flash knockdown. No big deal.”