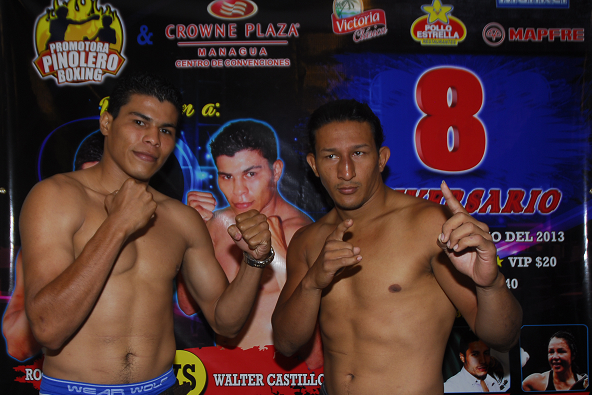 On Saturday June 29th at the Crowne Plaza in Managua, Nicaragua fans will get to see the final chapter of the soap opera rivalry between Walter Castillo (21-2, 14KO’s) and Rosemberg Gomez (16-3-1, 12 KO’s). It will possibly come to a close as the two fighters who have a deep hatred for each other have promised a war.

The final press conference is expected to be a heated one on Friday as well as the weigh in.

This bout should have happened in the past but due to some setbacks it kept getting postponed allowing the hatred between the two to build. out is one that both fighters have already promised an explosive, action packed performance. “I have said that I will knock Castillo out before the fourth round. I will apply pressure to Castillo from the opening bell and the only way he will be able to get away from me is if he puts on skates and skates away from me,” said Gomez.

“He is all talk. Let’s see if he is able to keep up with my pace. I am not promising a knockout but if he goes all ten rounds with me he is going to be badly beaten. You will learn to respect the best welterweight in this country,” quickly replied Castillo.
Castillo is by far the favorite going into the bout with his range, hand speed, footwork, boxing skills and his body work that he puts in on his opponents.

Rosemberg though has a strong punch and he loves to rearrange his opponents faces. Before the fight Rosemberg worked as a hairdresser at the Mercado Oriental or Oriental Market in Managua which is a very dangerous place for anyone even a trained fighter. Rosemberg will be looking to catch Castillo early but he cannot get careless if he wants to be victorious.

You can watch the fight live on Prodesa’s website for free at: http://www.prodesa.com.ni/