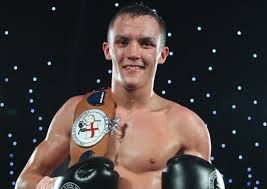 Josh Warrington insists he is ready for the biggest fight of his career to date when he faces Davide Diele for the vacant European Featherweight title at the First Direct Arena in Leeds on Saturday (October 4) live on Sky Sports in association with Grosvenor Casinos.
The Leeds star has personally shifted close to 2,000 tickets for Saturday’s show, and the 23 year old tastes international opposition for the first time in the shape of the Italian – and he is tasking the hometown faithful with creating a hostile atmosphere for the visitor.

“This is definitely the biggest fight of my career beyond any doubt,” said Warrington. “We’re going to have double the number that was here for the Lindsay fight, it’s going to be very noisy and hostile, and when you look at the bill with Ricky Burns, Brian Rose, Callum Smith and Tyrone Nurse, it’s an amazing card and I am topping it, that’s something special and there’s pressure to go with that. But to land the European belt will be a dream come true.

“Diele has been there and done it, he’s an experienced guy and the number one mandatory to fight for the title, so I am not taking an easy option here. He comes forward, he’s busy, and he likes a scrap so it’s going to be an entertaining fight. He’s in the way of something that I have dreamt about in the bath, aching, after nights of training, thinking about how my career will go, bringing European glory to Leeds in Leeds will be something special. It’s a big coup to have the fight here, he’s going to walk into a very, very hostile atmosphere and I’ve told the fans to make it as noisy as possible and it’s not going to be nice for him to have 6,000 mental Leeds people going berserk, it’ll be loud and they will be my twelfth man.

“Preparations have been great, the camp has gone really well, I’ve had some excellent sparring, the strength and conditioning has been superb and it means I feel the strongest that I have ever felt and ready to show that tonight.
“I’ve been to Manchester and Bolton a lot and got some quality sparring in with Scott Quigg, Stephen Smith, Jamie and Gavin McDonnell and Maxi Hughes, the list goes on and on, we’ve had some great sparring and a lot of rounds so I am very sharp and very confident. We’ve been working on a few new things and have a few game-plans up our sleeves for Diele.”