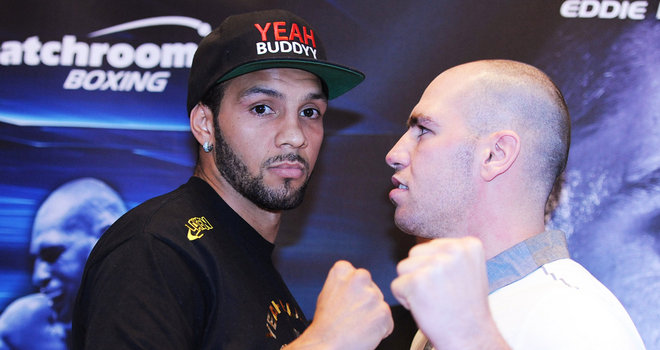 Granted, the final meal brought to the table didn’t quite look as appetizing as advertised, perhaps the steak was a little more shriveled or the burger a little more deflated than the plump bun in the picture on the menu, but you still devoured it like a beast and felt full afterwards, it did the job.

A little like the anticipated ten round cruiser weight confrontation between Stephen Simmons now 10(5)-0 and Wadi Camacho 12(8)-3. Some teeth grindingly awkward theatrics at a press conference is all it takes for Boxing suckers like me to heap more mustard on this burger than needed.

Two big guys who don’t like each other rarely disappoints when providing fight entertainment approaching a build up, even if the verbal jabs thrown outside the ring hit harder than the ones actually in it, it’s all good. We run with it.

A messy opener, both fighters on edge, hints at what’s in store for us for a lot of this fight. Holding; hugging; pushing and unclean punching, fantastic. In reality, nothing less than should be expected from fighters at a fairly modest stage of their career. None of these guys will be facing Marco Huck any time soon.

In the 2nd it’s noted that Camacho’s jab is starting to read Simmons, who looks a little heavier on his feet than expected this early. Possibly an attempt to be set and strong to counter the often illuminated chin of Camacho. Simmons begins the party with a right hand, the first attempt to actually land with clarity, and here we go.

A big right hand in the 3rd is an initial attempt at unwinding the tall awkward Camacho puzzle, at least for this round. Camacho can’t seem to avoid the single solid blows of Simmons, who’s finding his feet a little in the mud.

Simmons is still in control in the next round, but an oxygen sapping left rip to the body of Simmons is just enough to make him reset himself, and it’s noticeable. Perhaps not enough for Camacho to prise the round from Simmons who outside of that temporary blip to the midsection, was working well.

In the 5th the back and forth nature of the fight is emphasized as the tide switches and it’s Camacho who flaunts a little Boxing skill this round. His cleaner and longer punches catching Simmons with a lot more regularity and consistency. Quiet 6th round, only real point of note is the apparent heaviness of Simmons work as he tires, his punches looking a little slow and telegraphed.

As is the pattern throughout this fight, the constant holding and untidy work inside continues. In the 7th though, Camacho is reading Simmons a little too easy, and beginning to edge his case toward the Jury for being the better Boxer, and it’s a convincing argument. The hard body shots thrown also provide more evidence. The kids get a telling off from daddy Davies this round, Camacho for leaning and Simmons for pushing with the head a little too sharply. Frustration, nothing more.

The tug of war intensifies, Simmons closes the gap really well this round, his overhand right clubbing swings of hope and left hooks propelled with a charge, crack Camacho cleanly several times. His chin again, ripe for them; always a juicy open target.

Then it happens, in the 9th a huge Simmons round, Camacho is caught clean several times. An Almighty right hand from Simmons, then some big lead rights for fun. A brutal round for Camacho, he’s hurt. On his feet only through the assistance of Simmons as he hangs on to the Scotsman for dear life. For the first time, the balance of the fight is openly tipped toward in favour of one of them.

Camacho is stopped in the last round. Simmons appreciated the pressure was piled, and the weight of it he carried; he answered the call. Jumping right onto Camacho this round landing a huge right hand, this almost snapped Camacho’s head off his shoulders, spinning into the crowd. An instantaneous repeat from Simmons with some unclean mauling and barraging sinks a sorry looking Camacho to the canvas on his knees, praying for direction; clarity; for anything.

Camacho makes it to his feet but resembles a confused alcoholic falling out of the front doors of his local watering hole. Wadi wandering off toward the corner, back turned to the counting Richie Davis; falling against the ropes, a party goer left in the streets after a heavy night. Grace is given to Camacho but one right hand is all that’s needed to appreciate that final chance for a Camacho show stopper was a little too generous.

The grudge match is settled, neither fighters future in the sport is 100% certain, as both showed deficiencies in areas we may not have expected.

However, on a more selfish note, I felt satisfied after the meal was consumed after all. I’ll come to this restaurant again.