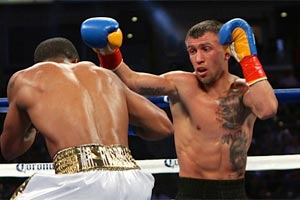 We’re getting closer to the next big fight in Canelo-Lara and we have tons of boxing going on. We have seen some unexpected results and of course we are still waiting on the fallout from the Golden Boy break up. All this means is that it is a great time to be a boxing fan as the sport is thriving.

While it may not be right the way a guy with only 3 fights has had 2 title shots within that time, Lomachenko proved that he does have the skills to beat anyone. Gary Russell Jr. was faster but the accuracy, power and ring generalship of Lomachenko proved to be the difference. Lomachenko is going to be a force and a tall order for anyone to include Rigondeaux. As a matter of fact I would pick him to beat Rigondeaux at this point based on what I have seen out of both fighters. If Russell’s power didn’t bother him Rigondeaux’s definitely won’t.

In what was a very good fight between Guerrero and Kamegai I couldn’t help but wonder if the Ghost was a little tired and had no legs. He repeatedly allowed himself to get trapped on the ropes and was whaled on by Kamegai. Fighting toe to toe is one thing but was it a choice or was he simply over trained with his new crossfit regimen. Either way that was one heck of a fight and should be thrown into any fight of the year conversation for sure.

Chad Dawson made his return on the undercard but by the looks of him he came straight out of his house to do so. Weighing in at a whopping 202lbs on fight night and being 4lbs overweight for the fight is not a good sign. Even more so knowing that he did not even make $20,000 for the fight makes me wonder if he was just desperate and needed some cash. Don’t get me wrong. He destroyed Blades but he had no choice really. He was in no shape to go rounds with anyone so he had to get the guy out as soon as possible. I just hope this is not another story of a fighter who spent all his money and has to keep fighting to earn a living. We have seen that way too much and we don’t need to see it again.

With this basically being the first fight card for Oscar without Schaefer or Binkow, I say it couldn’t have gone much better for Oscar. Since 99% of the people had never heard of Kamegai before this fight I am sure that they thought it would be a non-competitive fight but we were wrong. The co-main event was a great fight and the Alexander- Soto fight was decent. Other than Guerrero getting paid $1 Million for the fight it was actually well worth it. Let’s just hope Oscar has enough fighters left to give us a quality product.

So who is Running Golden Boy?

First Schaefer resigned and Binkow was acting COO and now Binkow resigned. So who is running Golden Boy’s day to day operations? I am eager to see how long it takes for Oscar to get a replacement and whom it may be. All we care about are good fights being made and we know whoever the head honcho will be, they will have to be willing to work with everyone. Which is best for business.

Canelo versus Lara is Almost Here

This fight is really intriguing to me. I am picking Canelo but would not be surprised if it goes to Lara. I think one thing that is being discounted is Canelo’s boxing ability. I see him surprising Lara with his speed and head movement when he chooses to box and I think he will definitely overpower Lara on the inside. If Angulo can get to Lara I am 100% sure Canelo can. Nonetheless Lara is a great boxer and has a lot of skills at his disposal. If he can stay on the outside and box he can win. All I know is I am ready to watch this fight to see how it all unfolds.

In what was a pretty good fight on NBC Sports, Mohammedi put a beating on Dudchenko to become Hopkins mandatory. This might be a good filler fight if Hopkins-Stevenson does not get made but I think we may see him fighting Kovlev before he gets Hopkins. If that is the case I am fine with that. Mohammedi-Kovalev would be a good action fight and very crowd pleasing for as long as it lasts.

There have been conflicting reports from both camps that contracts may or may not have been signed yet. Brooks camp says they signed, Porters camp says they haven’t seen it. I am just hoping the fight gets made. I think Brook has a real good shot to beat Porter and I am actually picking the upset. Brooks fight with Jones showed his toughness and that he could handle diversity. Add in the fact that he is better than both Paulie and Devon at this point in their careers and we got a good fight. I have a feeling that everybody is seeing Porter as a wrecking machine but that is not really the case. He went barely beat Diaz and he is not a knock out artist by any means. Either way this fight is 50/50 once it gets signed.

Manny and Floyd have both had months to pick an opponent and haven’t. We all know they ain’t fighting each other and in all honesty they don’t have much to choose from anymore. Floyd seemingly always takes forever to choose an opponent (Canelo excluded) but his options are slim as far as big money goes. It should be Maidana or Khan at this point as the money options for Floyd. Unless he fights Cotto for the MW title in December like he should.

As far as Manny goes Koncz says Manny is not fighting Algieri or JMM and we know he is not fighting Bradley again, so who the heck is he going to fight? He would undoubtedly have to fight a Golden Boy fighter because Top Rank doesn’t have anyone left for him to fight.

I didn’t get to give the guy props for beating Ruslan 2 weeks ago. I had him winning all but 2 rounds in the fight. He has an entertaining fighting style for sure and he knows how to box. It is nice to see another “Rocky” like story come to life. I hope that he gets a big payday and a chance to prove some more doubters wrong.

That’s all we got for this week but that is by far not all there was to talk about. Make sure that you catch the Boxing Voice weekly radio show live every Thursday and Sunday starting at 7pm (East Coast time) or catch the podcast to get more insight and opinions on boxing.