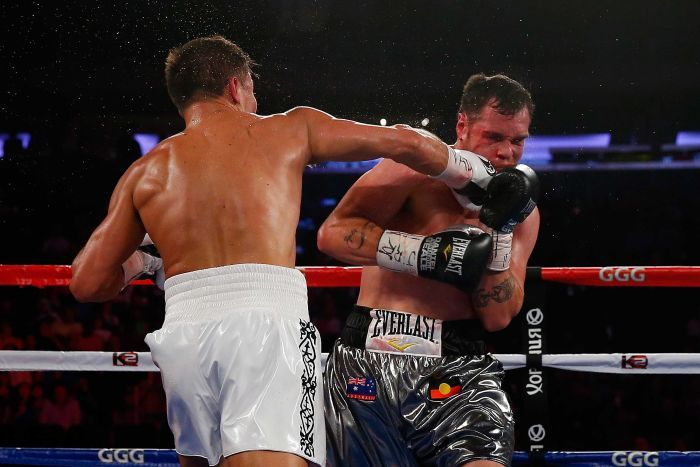 A lot of experts where saying that this was Gennady Golovkin’s toughest fight to date, Daniel Geale had a good record having only lost twice, both by split decisions, one which he has since avenged.  He also has a recognized name on his resume in Felix Sturm.  His lack of power being the biggest concern and perhaps his only advantage was that he had gone the distance many more times than “GGG”, who has the highest knockout percentage in Middleweight history. With this knowledge it was maybe understandable but also concerning just how nervous Daniel Geale looked during Michael Buffers pre-fight ring introductions.

The Australian did come forward early on in the first round, showing awkward looking movement that may have been due to nervous energy but it didn’t take long for the hard hitting Kazakh to cut off the ring trapping the Australian a couple of times in the corner landing powerful shots, the time keeping was questionable as we were treated to an extra minutes action in the opening frame.

An early second round onslaught by Golovkin knocked Geale down for the first time in the fight and a cut which was recognizable at the end of the first was now opened up again, Geale tried to fight bravely and was rewarded with hearing the bell but it was obvious at this stage just how out of his depth he was.

Geale did do a good job of slipping shots early on in the third but everyone knew what was coming as “GGG” patiently stalked his prey before trapping his opponent and landing some huge shots. Geale did land one decent punch in the exchange but in doing so left himself wide open and was caught with a massive, flush, right hand and he was down again but this time he was hurt a lot more and initially beat the count on shaky legs but made it clear to the referee that he didn’t want to fight anymore.  It was all over and all to easy for Golovkin who made a serious statement, destroying a guy inside three rounds who had never been stopped before.

With this win the heavy handed Gennady Golovkin’s record improved to 30-0 with 27 KOs, in the post fight interview the fighter out of Kazakhstan described his style as “Mexican” before stating that he wants to unify the belts in the Middleweight division, calling out Miguel Cotto next. He may have to wait for that one as it’s likely Miguel will fight someone else before Canelo Alvarez.