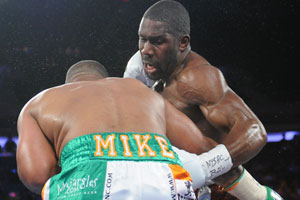 The Co-feature of the Gennady Golovkin vs Daniel Geale fight was a WBC eliminator between Philadelphia fighter Bryant Jennings (18-0) and Cuban Mike Perez (20-0-1). A fight between two undefeated heavyweights is always highly anticipated by boxing enthusiasts and with Deontay Wilder and Bermame Stiverne waiting in the wings, the heavyweight division, whilst still nowhere near as exciting as it used to be, at least has people’s attention again.

The scoring had some screaming controversy, so here’s a round by round break down.
Round 1
Perez was slicker and showed better movement, landing a few lefts to the body but nothing of any significance happened in this feeling out round, which caused a few boos from the Madison Square Garden crowd.
10-9 Perez
Round 2
Jennings was very cautious in his approach early on, being respectful of Perez power, who had stopped 10 of his 18 opponents. He did however land a decent left hook but it had no effect on the Cuban, who landed the more solid shots to win the round
10-9 Perez
Round 3
A better round than the opening two, with a few exchanges as Jennings periodically fought in the pocket for the first time of the fight. Perez continued to grow in confidence landing multiple lead lefts.
10-9 Perez
Round 4
It was clear from the instructions of Adam Booth in-between rounds that the game plan was to mentally break down Jennings, who at this early stage didn’t look like he was going to get into the fight as he was struggling to work out a way of getting into the fight.  Perez continued to be in the driving seat but it was a dull round.
10-9 Perez
Round 5
Jennings who was yet to win a round was given clear instructions by his corner to “go to work” in the fifth and he did have his best round of the fight, landing a nice 5 punch combination to both body and head, which included a nice uppercut which was enough to win the American his first round.
10-9 Jennings
Round 6
The referee was getting too involved in this round, which made for a lot of start and stop “action”.  Perez probably did enough to win the round but it was messy as these two fighters styles just didn’t gel and this one was looking like it was heading to the scorecards.
10-9 Perez
Round 7
It was at this stage where I contemplated scrapping this article and fast forwarding to the main event. Luckily for me, Jennings decided to get a bit more involved, perhaps with the knowledge that Perez had been known to fade in the second half of fights and he had his best round so far.
10-9 Jennings
Round 8
Jennings was instructed to throw his hands more, and started off well with a right hand that got Perez attention, who was beginning to hold more.  Jennings now building in confidence landed another big right before ending the round with a nice flurry of shots.  Despite being up on the score cards, Fitness was looking an issue for Perez.
10-9 Jennings
Round 9
So my decision to keep with this one had paid off and the fight was at least a bit more interesting in a round where Jennings was busier than the fading Perez.
10-9 Jennings
Round 10
Jennings landed the better shots including a nice short right hook to perhaps take this swing round and on my card this fight was now all tied up.
10-9 Jennings
Round 11
It was either fighters to win at this stage.  The American outworked the hard hitting Cuban but Perez, perhaps giving it everything he had left, did enough to win his first round in a long time.
10-9 Perez
Round 12
Jennings, who was clearly the fitter fighter came out the aggressor and wanting the fight more and the under pressure Perez made a costly error, having a point deducted for head butting and punching after the referee said told him to stop whilst leaning on Jennings over the ropes.  This was something he couldn’t afford to do in such a close contest.  Perez ate some big shots, that along with the point deduction made this a 2 point round and that was enough for Jennings to win the bout on my scorecard by a single point.
10-8 Jennings
My Scorecard
114-113 Jennings
Jennings was awarded the victory via a majority decision.  One judge scoring it 114-113 in favor of Perez, the second giving it to Jennings 115-112 and the third judge had it the same as me 114-113 Jennings.
Bryant Jennings game plan worked, he showed the other heavyweights out there the blueprint to beating Mike Perez, get through the first few rounds and take over the slowing down fighter.  For me Perez is probably the more skilled fighter of the two but needs to work harder in the gym he really needs to get in better shape if he is to stand any chance of mixing it with the divisions best but there wasn’t anything in the performances of either fighter to suggest they could beat Wilder, Stiverne or Tyson Fury.
As for the point deduction, it certainly costed Perez the draw, so readers what do you think of the call and decision?
Tweet